The Acheron (/ˈækərən/; Ancient Greek: Ἀχέρων Acheron or Ἀχερούσιος Acherousios; Greek: Αχέροντας Acherontas) is a river located in the Epirus region of northwest Greece. It is 52 km (32 mi) long, and its drainage area is 705 km2 (272 sq mi).[1] Its source is near the village Zotiko, in the southwestern part of the Ioannina regional unit and it flows into the Ionian Sea in Ammoudia, near Parga.

In ancient Greek mythology, Acheron was known as the "river of woe", and was one of the five rivers of the Greek underworld. The word is of uncertain etymology.[2]

In the Homeric poems, the Acheron was described as a river of Hades, into which Cocytus and Phlegethon both flowed.[3][4]

The Roman poet Virgil called it the principal river of Tartarus, from which the Styx and Cocytus both sprang.[5] The newly dead would be ferried across the Acheron by Charon in order to enter the Underworld.[6] 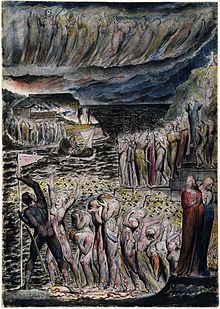 William Blake's depiction of "The Vestibule of Hell and the Souls Mustering to Cross the Acheron" in his Illustrations to Dante's "Divine Comedy" object 5 c. 1824–27. The original for the work is held by the National Gallery of Victoria.[7]

The Suda describes the river as "a place of healing, not a place of punishment, cleansing and purging the sins of humans".[8]

According to later traditions, Acheron had been a son of Helios and either Gaia or Demeter, who had been turned into the Underworld river bearing his name after he refreshed the Titans with drink during their contest with Zeus.[9] By this myth, Acheron is also the father of Ascalaphus by either Orphne[10] or Gorgyra.[11]

The river called Acheron with the nearby ruins of the Necromanteion is found near Parga on the mainland opposite Corfu. Another branch of Acheron was believed to surface at the Acherusian cape (now Karadeniz Ereğli in Turkey) and was seen by the Argonauts according to Apollonius of Rhodes. Greeks who settled in Italy identified the Acherusian lake into which Acheron flowed with Lake Avernus. Plato in his Phaedo identified Acheron as the second greatest river in the world, excelled only by Oceanus. 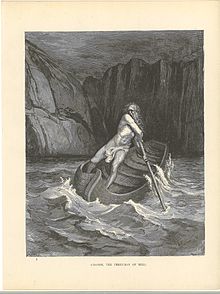 Following Greek mythology, Charon ferries souls across the Acheron to Hell. Those who were neutral in life sit on the banks

He claimed that Acheron flowed in the opposite direction from Oceanus beneath the earth under desert places. The word is also occasionally used as a synecdoche for Hades itself. Virgil mentions Acheron with the other infernal rivers in his description of the underworld in Book VI of the Aeneid. In Book VII, line 312[12] he gives to Juno the famous saying, flectere si nequeo superos, Acheronta movebo: 'If I cannot bend the will of Heaven, I shall move Hell.' The same words were used by Sigmund Freud as the dedicatory motto for his seminal book The Interpretation of Dreams, figuring Acheron as psychological underworld beneath the conscious mind.

The Acheron was sometimes referred to as a lake or swamp in Greek literature, as in Aristophanes' The Frogs and Euripides' Alcestis.

In Dante's Inferno, the Acheron river forms the border of Hell. Following Greek mythology, Charon ferries souls across this river to Hell. Those who were neutral in life sit on the banks.

The name Acheron was used as a reference within the Alien film series for the planet LV426 (where the crashed alien vessel containing the face-huggers was originally found). Known solely by its alphanumeric designation during the first film, the planet was named as Acheron during the sequel Aliens.

Acheron was the French privateer ship that Captain Jack Aubrey pursued in the film of the book; Master and Commander: The Far Side of the World (2003).

The first movement of the first track on the album Warp Riders by The Sword is titled Acheron.

The name Acheron is also used the Lawful (Neutral) Evil Outer Plane in Dungeons & Dragons, however it is described as consisting of a huge number of iron cubes of varying size, instead of a river.

Acheron was referenced in Golden Sun: The Lost Age as a critical hit named 'Acheron's Grief' by one of Golden Sun's endgame weapons: 'Darksword'.

In addition, the River Acheron makes multiple appearances in the Percy Jackson & the Olympians series.

Acheron is a track name off the debut album, Pantheon of the Nightside Gods by the band Belzebubs.

Acheron Lake in Antarctica is named after the mythical river.