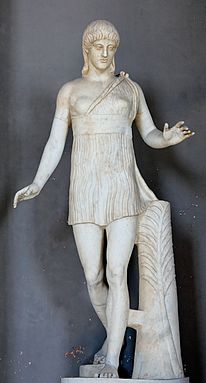 The "Barberini Atalanta",[1] formerly in the Barberini Palace, Rome, now in the Vatican, inv. 2784. Either Greek original, 1st century BC or Roman copy, 2nd century AD

Atalanta (/ˌætəˈlæntə/; Greek: Ἀταλάντη Atalantē) is a character in Greek mythology, a virgin huntress, unwilling to marry, and loved by the hero Meleager.

Having grown up in the wilderness, Atalanta became a fierce hunter and was always happy. She took an oath of virginity to the goddess Artemis, and slew two centaurs, Hylaeus and Rhoecus, who attempted to rape her.[3][4] 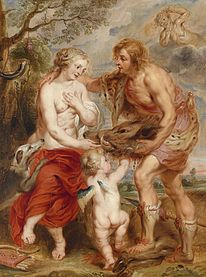 Meleager, assisted by Cupid, presents Atalanta with the head of the Calydonian Boar. Oil on panel, studio of Rubens, Rothschild collection, Château de Ferrières. Another large version by Rubens c.1635 is at the Alte Pinakothek, Munich, and a smaller version at the Walker Art Gallery, Liverpool

When Artemis was forgotten at a sacrifice by King Oineus, she was angered and sent the Calydonian Boar, a wild boar that ravaged the land, men, and cattle and prevented crops from being sown. Atalanta joined Meleager and many other famous heroes on a hunt for the boar. Many of the men were angry that a woman was joining them, but Meleager, though married, lusted for Atalanta, and so he persuaded them to include her. Several of the men were killed before Atalanta became the first to hit the boar and draw blood. After Meleager finally killed the boar with his spear, he awarded the hide to Atalanta. This act of Meleager’s generosity caused a set of events that led to his death.[5] Meleager's uncles, Plexippus and Toxeus, were angry and tried to take the skin from her. In revenge, Meleager killed his uncles. Wild with grief, Meleager's mother Althaea threw a charmed log on the fire, which consumed Meleager's life as it burned. 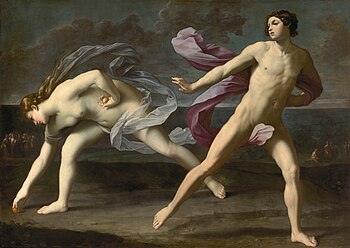 After the Calydonian boar hunt, Atalanta was rediscovered by her father. He wanted her to be married, but Atalanta, uninterested in marriage, agreed to marry only if her suitors could outrun her in a footrace. Those who lost would be killed. King Oeneus agreed, and many young men died in the attempt until Hippomenes, a grandson of Poseidon, came along.[5] Hippomenes asked the goddess Aphrodite for help, and she gave him three golden apples in order to slow Atalanta down. The apples were irresistible, so every time Atalanta got ahead of Hippomenes, he rolled an apple ahead of her, and she would run after it. In this way, Hippomenes won the footrace and came to marry Atalanta. In some versions, Atalanta loved Hippomenes and hoped he would win.[5] Eventually they had a son Parthenopaios, who was one of the Seven against Thebes. Zeus – or his mother, Rhea – turned Atalanta and Hippomenes into lions after they had sex together in one of his temples. Other accounts say that Aphrodite changed them into lions because they did not give her proper honor. The belief at the time was that lions could not mate with their own species, only with leopards; thus Atalanta and Hippomenes would never be able to remain with one another.

In many versions of the quest for the Golden Fleece, such as that published by Robert Graves in 1944, Atalanta sailed with the Argonauts as the only woman among them. She jumped aboard the ship soon after the expedition set out, invoking the protection of Artemis, to whom she was a virgin priestess. She was following Meleager, who had put away his young wife for Atalanta's sake. Atalanta returned his love but was prevented by an oracle from consummating their union, being warned that losing her virginity would prove disastrous for her. A disappointed Meleager joined the Argo, but Atalanta would not let him out of her sight. She plays a major part in various adventures of Jason's crew, suffered injury in a battle at Colchis, and was healed by Medea. Apollonius of Rhodes, on the other hand, claims Jason would not allow a woman on the ship because she would cause strife on the otherwise all-male expedition (Argonautica 1.769–73). 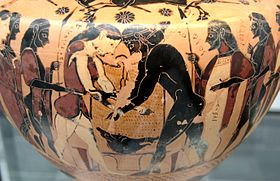 The Bibliotheca also says she wrestled and defeated Peleus at the funeral games for Pelias. The subject is popular in ancient Greek vase painting.

The Race between Atalanta and Hippomenes, by Nicolas Colombel (1644–1717), Liechtenstein Museum, Vienna. Atalanta is slowed as she picks up the golden apples rolled down by her rival