From Wikipedia, the free encyclopedia
Jump to navigation Jump to search
Gemstone: beryllium aluminium cyclosilicate
For the given name, see Beryl (given name). For other uses, see Beryl (disambiguation).

Beryl (/ˈbɛrəl/ BERR-əl) is a mineral composed of beryllium aluminium cyclosilicate with the chemical formula Be3Al2Si6O18.[5] Well-known varieties of beryl include emerald and aquamarine. Naturally occurring, hexagonal crystals of beryl can be up to several meters in size, but terminated crystals are relatively rare. Pure beryl is colorless, but it is frequently tinted by impurities; possible colors are green, blue, yellow, red (the rarest), and white. Beryl is also an ore source of beryllium.[6]

When the first eyeglasses were constructed in 13th century Italy, the lenses were made of beryl (or of rock crystal) as glass could not be made clear enough. Consequently, glasses were named Brillen in German[8] (bril in Dutch and briller in Danish). 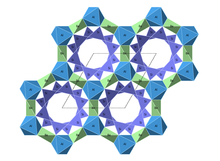 Beryl belongs to the hexagonal crystal system. Normally Beryl forms hexagonal columns but can also occur in massive habits. As a cyclosilicate beryl incorporates rings of silicate tetrahedra of Si
6O
18 that are arranged in columns along the C axis and as parallel layers perpendicular to the C axis, forming channels along the C axis.[6] These channels permit a variety of ions, neutral atoms, and molecules to be incorporated into the crystal thus disrupting the overall charge of the crystal permitting further substitutions in Aluminium, Silicon, and Beryllium sites in the crystal structure.[6] These impurities give rise to the variety of colors of beryl that can be found. Increasing alkali content within the silicate ring channels causes increases to the refractive indices and birefringence.[10]

Beryl is a beryllium compound that is a known carcinogen with acute toxic effects leading to pneumonitis when inhaled.[11] Care must thus be used when mining, handling, and refining these gems. 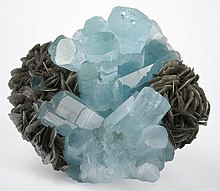 Aquamarine (from Latin: aqua marina, "sea water"[12]) is a blue or cyan variety of beryl. It occurs at most localities which yield ordinary beryl. The gem-gravel placer deposits of Sri Lanka contain aquamarine. Green-yellow beryl, such as that occurring in Brazil, is sometimes called chrysolite aquamarine.[13] The deep blue version of aquamarine is called maxixe. Maxixe is commonly found in the country of Madagascar. Its color fades to white when exposed to sunlight or is subjected to heat treatment, though the color returns with irradiation. 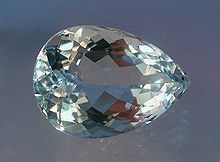 The pale blue color of aquamarine is attributed to Fe2+. Fe3+ ions produce golden-yellow color, and when both Fe2+ and Fe3+ are present, the color is a darker blue as in maxixe. Decoloration of maxixe by light or heat thus may be due to the charge transfer between Fe3+ and Fe2+.[14][15][16][17] Dark-blue maxixe color can be produced in green, pink or yellow beryl by irradiating it with high-energy particles (gamma rays, neutrons or even X-rays).[18]

In the United States, aquamarines can be found at the summit of Mt. Antero in the Sawatch Range in central Colorado. In Wyoming, aquamarine has been discovered in the Big Horn Mountains, near Powder River Pass. Another location within the United States is the Sawtooth Range near Stanley, Idaho, although the minerals are within a wilderness area which prevents collecting. In Brazil, there are mines in the states of Minas Gerais, Espírito Santo, and Bahia, and minorly in Rio Grande do Norte. The mines of Colombia, Zambia, Madagascar, Malawi, Tanzania and Kenya also produce aquamarine.

The largest aquamarine of gemstone quality ever mined was found in Marambaia, Minas Gerais, Brazil, in 1910. It weighed over 110 kg (243 lb), and its dimensions were 48.5 cm (19 in) long and 42 cm (16 1⁄2 in) in diameter.[4](p110) The largest cut aquamarine gem is the Dom Pedro aquamarine, now housed in the Smithsonian Institution's National Museum of Natural History.[19]

The ancient Romans believed that aquamarine would protect against any dangers while travelling at sea, and that it provided energy and cured laziness.[20]

Emerald is green beryl, colored by trace amounts of chromium and sometimes vanadium.[14][21] Most emeralds are highly included, so their brittleness (resistance to breakage) is classified as generally poor. 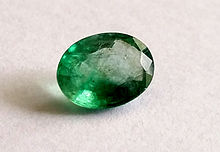 Emeralds in antiquity were mined by the Egyptians and in what is now Austria, as well as Swat in contemporary Pakistan.[23] A rare type of emerald known as a trapiche emerald is occasionally found in the mines of Colombia. A trapiche emerald exhibits a "star" pattern; it has raylike spokes of dark carbon impurities that give the emerald a six-pointed radial pattern. It is named for the trapiche, a grinding wheel used to process sugarcane in the region. Colombian emeralds are generally the most prized due to their transparency and fire. Some of the rarest emeralds come from the two main emerald belts in the Eastern Ranges of the Colombian Andes: Muzo and Coscuez west of the Altiplano Cundiboyacense, and Chivor and Somondoco to the east. Fine emeralds are also found in other countries, such as Zambia, Brazil, Zimbabwe, Madagascar, Pakistan, India, Afghanistan and Russia. In the US, emeralds can be found in Hiddenite, North Carolina. In 1998, emeralds were discovered in Yukon.

Emerald is a rare and valuable gemstone and, as such, it has provided the incentive for developing synthetic emeralds. Both hydrothermal[24] and flux-growth synthetics have been produced. The first commercially successful emerald synthesis process was that of Carroll Chatham.[25] The other large producer of flux emeralds was Pierre Gilson Sr., which has been on the market since 1964. Gilson's emeralds are usually grown on natural colorless beryl seeds which become coated on both sides. Growth occurs at the rate of 1 millimetre (0.039 in) per month, a typical seven-month growth run producing emerald crystals of 7 mm of thickness.[26] The green color of emeralds is widely attributed to presence of Cr3+ ions.[15][16][17] Intensely green beryls from Brazil, Zimbabwe and elsewhere in which the color is attributed to vanadium have also been sold and certified as emeralds.[27][28][29]

"Heliodor" redirects here. For the given name, see Heliodorus. 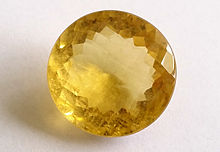 Golden beryl can range in colors from pale yellow to a brilliant gold. Unlike emerald, golden beryl generally has very few flaws. The term "golden beryl" is sometimes synonymous with heliodor (from Greek hēlios – ἥλιος "sun" + dōron – δῶρον "gift") but golden beryl refers to pure yellow or golden yellow shades, while heliodor refers to the greenish-yellow shades. The golden yellow color is attributed to Fe3+ ions.[14][15] Both golden beryl and heliodor are used as gems. Probably the largest cut golden beryl is the flawless 2054-carat stone on display in the Hall of Gems, Washington, D.C., United States.[30] 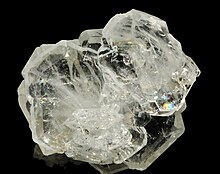 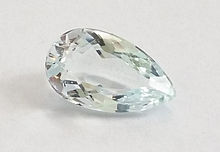 Colorless beryl is called goshenite. The name originates from Goshen, Massachusetts, where it was originally discovered. In the past, goshenite was used for manufacturing eyeglasses and lenses owing to its transparency. Nowadays, it is most commonly used for gemstone purposes.[31][32]

The gem value of goshenite is relatively low. However, goshenite can be colored yellow, green, pink, blue and in intermediate colors by irradiating it with high-energy particles. The resulting color depends on the content of Ca, Sc, Ti, V, Fe, and Co impurities.[15] 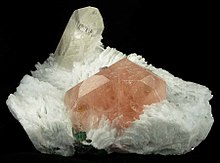 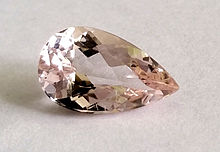 Morganite, also known as "pink beryl", "rose beryl" "pink emerald" (which is not a legal term according to the new Federal Trade Commission Guidelines and Regulations), and "cesian (or caesian) beryl", is a rare light pink to rose-colored gem-quality variety of beryl. Orange/yellow varieties of morganite can also be found, and color banding is common. It can be routinely heat treated to remove patches of yellow and is occasionally treated by irradiation to improve its color. The pink color of morganite is attributed to Mn2+ ions.[14]

Pink beryl of fine color and good sizes was first discovered on an island off the coast of Madagascar in 1910.[33] It was also known, with other gemstone minerals, such as tourmaline and kunzite, at Pala, California. In December 1910, the New York Academy of Sciences named the pink variety of beryl "morganite" after financier J. P. Morgan.[33] 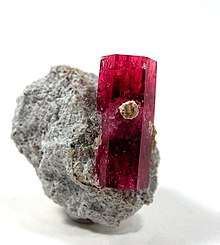 Red beryl (formerly known as "bixbite" and marketed as "red emerald" or "scarlet emerald" but note that both latter terms involving "Emerald" terminology are now prohibited in the United States under Federal Trade Commission Regulations) is a red variety of beryl. It was first described in 1904 for an occurrence, its type locality, at Maynard's Claim (Pismire Knolls), Thomas Range, Juab County, Utah.[36][37] The old synonym "bixbite" is deprecated from the CIBJO, because of the risk of confusion with the mineral bixbyite (both were named after the mineralogist Maynard Bixby).[38] The dark red color is attributed to Mn3+ ions.[14] 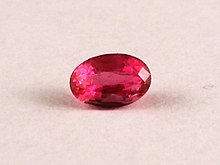 Red beryl is very rare and has been reported only from a handful of locations: Wah Wah Mountains, Beaver County, Utah; Paramount Canyon and Round Mountain, Sierra County, New Mexico, although the latter locality does not often produce gem grade stones;[36] and Juab County, Utah. The greatest concentration of gem-grade red beryl comes from the Ruby-Violet Claim in the Wah Wah Mountains of mid-western Utah, discovered in 1958 by Lamar Hodges, of Fillmore, Utah, while he was prospecting for uranium.[39] Red beryl has been known to be confused with pezzottaite, a caesium analog of beryl, that has been found in Madagascar and more recently Afghanistan; cut gems of the two varieties can be distinguished from their difference in refractive index, and rough crystals can be easily distinguished by differing crystal systems (pezzottaite trigonal, red beryl hexagonal). Synthetic red beryl is also produced.[40] Like emerald and unlike most other varieties of beryl, red beryl is usually highly included.

While gem beryls are ordinarily found in pegmatites and certain metamorphic stones, red beryl occurs in topaz-bearing rhyolites.[41] It is formed by crystallizing under low pressure and high temperature from a pneumatolytic phase along fractures or within near-surface miarolitic cavities of the rhyolite. Associated minerals include bixbyite, quartz, orthoclase, topaz, spessartine, pseudobrookite and hematite.[37]