From Wikipedia, the free encyclopedia
Jump to navigation Jump to search
Muse of epic poetry
This article is about the muse. For the steam instrument, see Calliope (music). For other uses, see Calliope (disambiguation).

In Greek mythology, Calliope (/kəˈlaɪəpiː/ kə-LY-ə-pee; Ancient Greek: Καλλιόπη, Kalliopē "beautiful-voiced") is the Muse who presides over eloquence and epic poetry; so called from the ecstatic harmony of her voice. Hesiod and Ovid called her the "Chief of all Muses".[1] 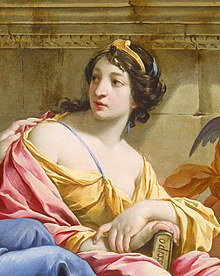 Detail of painting The Muses Urania and Calliope by Simon Vouet, in which she holds a copy of the Odyssey

Calliope had two famous sons, Orpheus[2] and Linus,[3] by either Apollo or King Oeagrus of Thrace. She taught Orpheus verses for singing.[2] According to Hesiod, she was also the wisest of the Muses, as well as the most assertive. Calliope married Oeagrus in Pimpleia, a town near Mount Olympus.[4] She is said to have defeated the daughters of Pierus, king of Thessaly, in a singing match, and then, to punish their presumption, turned them into magpies. [5]

In some accounts, Calliope is the mother of the Corybantes by her father Zeus.[6]

She was sometimes believed to be Homer's muse for the Iliad and the Odyssey.[citation needed] The Roman epic poet, Virgil, invokes her in the Aeneid (9.525). In some cases, she is said to be the Mother of sirens.

Calliope is usually shown with a writing tablet in her hand. At times, she is depicted carrying a roll of paper or a book, or wearing a gold crown. She is also depicted with her children.

The Italian poet Dante Alighieri, in his Divine Comedy, refers to Calliope:

Here rise to life again, dead poetry!
Let it, O holy Muses, for I am yours,
And here Calliope, strike a higher key,
Accompanying my song with that sweet air
which made the wretched Magpies feel a blow
that turned all hope of pardon to despair

Calliope Beach in Antarctica is named after the nymph.