From Wikipedia, the free encyclopedia
Jump to navigation Jump to search
This article is about theories of the origin of the universe. For the Björk song, see Cosmogony (song).
"Cosmogenesis" redirects here. For the Obscura album, see Cosmogenesis (album).

Cosmogony (from the Koine Greek Greek: κοσμογονία (from Greek: κόσμος "cosmos, the world") and the root of γί(γ)νομαι / γέγονα ("come into a new state of being")) is any model concerning the origin of either the cosmos or the universe.[1][2][3] 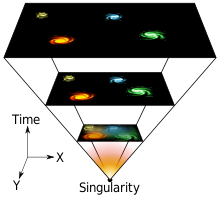 The Big Bang theory, which states that the universe originally expanded from high or infinite density, is widely accepted by physicists.

In astronomy, cosmogony refers to the study of the origin of particular astrophysical objects or systems, and is most commonly used in reference to the origin of the universe, the Solar System, or the Earth–Moon system.[1][2] The prevalent cosmological model of the early development of the universe is the Big Bang theory.[4] Sean M. Carroll, who specializes in theoretical cosmology and field theory, explains two competing explanations for the origins of the singularity, which is the center of a space in which a characteristic is limitless.[5] An example of this is when the black hole reaches a point of singularity and gravity, as the characteristic of this space becomes boundless. It is generally accepted that the universe began at a point of singularity, and when the singularity of the universe started to expand, the Big Bang occurred, which evidently began the universe. The other explanation, held by proponents like Stephen Hawking, asserts that "time" did not exist when it emerged along with the universe. This assertion implies that the universe does not have an origin story. Time did not exist "prior" to the creation of the universe. Hence, it is unclear whether properties such as space, or time emerged with the singularity and the universe as it is known.[5][6]

Despite the research, there is currently no theoretical model that explains the earliest moments of the universe's existence (during the Planck epoch) due to a lack of a testable theory of quantum gravity. Nevertheless, researchers in string theory, its extensions (see M theory), and of loop quantum cosmology like Barton Zwiebach and Washington Taylor, have proposed solutions to assist in the explanation of the universe's earliest moments[7] Cosmogonists have only tentative theories for the early stages of the universe and its beginning. The proposed theoretical scenarios include string theory, M-theory, the Hartle—Hawking initial state, string landscape, cosmic inflation, the Big Bang, and the ekpyrotic universe. Some of these proposed scenarios, like the string theory, are compatible; whereas, others are not.[8] 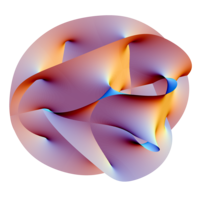 Projection of a Calabi–Yau manifold from string theory. In quantum physics, there remain different, plausible theories regarding what combination of "stuff", space, or time emerged along with the singularity (and therefore this universe).[9] The main disagreement among theories is whether time existed "before" the emergence of our universe. 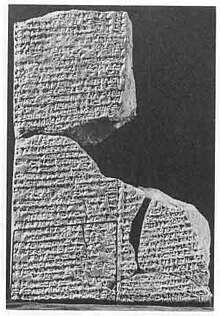 Written on this Sumerian tablet are parts of the creation epic, Eridu Genesis.

Cosmogony does not only relate to scientific theories, but also has connections to the humanities, more specifically creation myths. Creation, or cosmogonic myths, explain the creation of the universe or the cosmos by either

Before cosmogony had roots in scientific theories, creation myths were used to provide explanations for the origin story of the universe. For instance, Eridu Genesis, the oldest known creation myth founded on Sumerian tablets, reveal how the epic concerned itself with the creation of the world, formulating of cities, and a great flood. The universe was created out of the primeval sea (see also Abzu), and thus, the gods are created and men were created to tend to nature.[11][12] Creation myths vary, but they may share a similar deity or symbol. For instance, the ruler of the gods in Greek mythology, Zeus, is similar to the ruler of the gods in Roman mythology, Jupiter (Jove).[13]

The term, myth, is generally believed to be stories that are fictional and purely for entertainment. However, myths help give historians and researchers insight into the theological practices and traditions of these cultures and thus, as literary critic and theorist Northrop Frye understood, exemplifies the significant importance of myths'.[13][14]

Cosmogony can be distinguished from cosmology, which studies the universe at large, its existence and does not inquire directly into the source of its origins. Yet, there is little ambiguity between cosmogony and cosmology in terms of the humanities. For instance, the cosmological argument from theology regarding the existence of God is an appeal to cosmogonical rather than cosmological ideas. However, in practice, there is a scientific distinction between cosmological and cosmogonical ideas.[15] Physical cosmology is the science that attempts to explain all observations relevant to the development and characteristics of the universe as a whole. Questions regarding why the universe behaves in such a way have been described by physicists and cosmologists as being extra-scientific (i.e., metaphysical), though speculations are made from a variety of perspectives that include extrapolation of scientific theories to untested regimes (i.e., at Planck scales), and philosophical or religious ideas.[6][15][4]