From Wikipedia, the free encyclopedia
Jump to navigation Jump to search
Ornamental headband worn by monarchs and others as a badge of royalty
For other uses, see Diadem (disambiguation).

Coin of Antiochus III the Great of the Seleucid Empire, shown wearing a diadem; the Greek inscription reads ΒΑΣΙΛΕΩΣ ΑΝΤΙΟΧΟΥ, of King Antiochus. 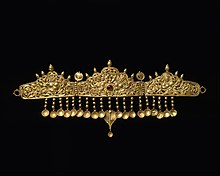 A diadem is a type of crown, specifically an ornamental headband worn by monarchs and others as a badge of royalty. The word derives from the Greek διάδημα diádēma, "band" or "fillet",[1] from διαδέω diadéō, "I bind round", or "I fasten".[2]

The term originally referred to the embroidered white silk ribbon, ending in a knot and two fringed strips often draped over the shoulders, that surrounded the head of the king to denote his authority. Such ribbons were also used to crown victorious athletes in important sports games in antiquity. It was later applied to a metal crown, generally in a circular or "fillet" shape. For example, the crown worn by Queen Juliana of the Netherlands was a diadem, as was that of a baron later (in some countries surmounted by three globes). The ancient Celts were believed to have used a thin, semioval gold plate called a mind (Old Irish) as a diadem.[3] Some of the earliest examples of these types of crowns can be found in ancient Egypt, from the simple fabric type to the more elaborate metallic type, and in the Aegean world.[4]

A diadem is also a jewelled ornament in the shape of a half crown, worn by women and placed over the forehead (in this sense, also called tiara). In some societies, it may be a wreath worn around the head. The ancient Persians wore a high and erect royal tiara encircled with a diadem. Hera, queen of the Greek gods, wore a golden crown called the diadem.

The Priest king of the Indus Valley Civilization wore what is probably the oldest example of a Diadem approx. 3000BC.

By extension, "diadem" can be used generally for an emblem of regal power or dignity. The head regalia worn by Roman Emperors, from the time of Diocletian onwards, is described as a diadem in the original sources. It was this object that the Foederatus general Odoacer returned to Emperor Zeno (the Emperor of the Eastern Roman Empire) after his expulsion of the usurper Romulus Augustus from Rome in 476 AD.

The image of the diadem takes on additional meaning in apocalyptic Christian scriptures where the placement of diadems on a claimant and its number signify the authority and status of the person wearing the royal bands. The Greek word διάδημα appears three times in the Book of Revelation.[5] The “great red dragon”—an image of Satan—has seven diadems on his seven heads (12:3), symbolizing his claim to complete authority (the head is a metonym for authority, cf. Judges 10:18). The beast from the sea, on the other hand, wears ten diadems on ten horns (13:1), symbolizing his claim to total power (the horn is a symbol of strength and power, cf. Deut. 33:17; 1 Kings 22:11; Ps. 89:17). The third figure who wears diadems in the New Testament is Christ whose “many diadems” are worn on the head (19:12).