From Wikipedia, the free encyclopedia
Jump to navigation Jump to search
This article is about the Greek deity. For the plant genus, see Euterpe (plant). For other uses, see Euterpe (disambiguation). 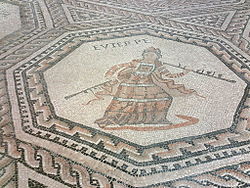 Euterpe on the replica of a Roman mosaic in Vichten

Euterpe (/juːˈtɜːrpiː/; Greek: Eὐτέρπη [eu̯térpɛː] "rejoicing well" or "delight", from Ancient Greek εὖ eu 'well' + τέρπειν terpein 'to please') was one of the Muses in Greek mythology, presiding over music. In late Classical times, she was named muse of lyric poetry.[1] She has been called “Giver of delight” by ancient poets.

Along with her sister Muses, Euterpe was believed to have lived on Mt. Olympus where she and her sisters entertained their father and the other Olympian gods with their great artistry. Later on, tradition also placed them on Mt. Helicon in Boeotia where there was a major cult center to the goddesses, or on Mt. Parnassus where the Castalian spring was a favorite destination for poets and artists.[3]

Pindar and other sources (the author of the Bibliotheca, and Servius), describe the Thracian king Rhesus, who appears in the Iliad, as son of Euterpe and the river-god Strymon; Homer calls him son of Eioneus.[4]

Her and her sisters’ role was to entertain the gods on Mount Olympus. She inspired the development of liberal and fine arts in Ancient Greece, serving as an inspiration to poets, dramatists, and authors (such as Homer).

According to the traditions and beliefs of the Ancient Greeks musicians would invoke the aid of Euterpe to inspire, guide and assist them in their compositions. This would often take the form of a prayer for divine inspiration from the minor goddess.[5]

The mountain spring on Mount Parnassus was sacred to Euterpe and the other Muses. It flowed between two high rocks above the city of Delphi, and in ancient times its sacred waters were introduced into a square stone basin, where they were retained for the use of the Pythia, the priests, priestesses, as well as the oracle of Apollo.[5]

Some people believe that she invented the aulos or double-flute, though most mythographers credit Marsyas or Athena with its invention. Some say she also invented other wind instruments. Euterpe is often depicted holding a flute in artistic renditions of her.