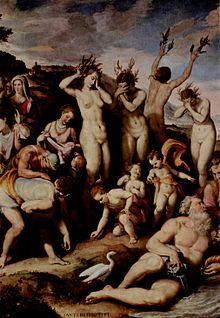 In Greek mythology, the Heliades (Greek: Ἡλιάδες, "children of the sun") were the daughters of Helios and Clymene the Oceanid. 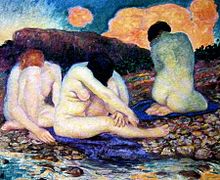 According to one version recorded by Hyginus, there were three of them: Aegiale, Aegle, and Aetheria. According to another version, there were five: Helia, Merope, Phoebe, Aetheria and Dioxippe.[1] Aeschylus's fragmentary Heliades[2][3] names Phaethousa and Lampetia, who are otherwise called daughters of Neaera.[4]

Their brother, Phaëthon, died after attempting to drive his father's chariot (the sun) across the sky. He was unable to control the horses and fell to his death (according to most accounts, Zeus struck his chariot with a thunderbolt to save the Earth from being set afire). The Heliades grieved for four months and the gods turned them into poplar trees and their tears into amber.[5][6] According to some sources, their tears (amber) fell into the river Eridanos, in which Phaethon had fallen.[7][8][9]

According to Hyginus, the Heliades were turned to poplar trees because they yoked the chariot for their brother without their father Helios' permission.[10]

This article incorporates text from a publication now in the public domain: Smith, William, ed. (1870). "article name needed". Dictionary of Greek and Roman Biography and Mythology.