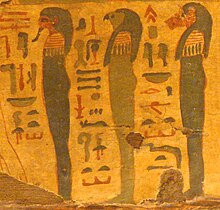 Three of the four children of Horus, the first one is Imset

In Egyptian mythology, Imset (also transcribed Imseti, Amset, Amsety, Mesti, and Mesta) is a funerary deity and one of the Four Sons of Horus. He is associated with the canopic jars,[1] specifically the one that contained the liver. Because the Egyptians saw the liver as the seat of human emotion, the depiction of Imset was, unlike his brothers, not associated with any animal but always depicted as a mummified human. Isis was considered his protector and Imset himself was recognized as the patron of the direction of the south. Imset was also associated with a broken heart or death due to excess of emotions, thus his name being translated as "the kindly one" in ancient Egyptian.