From Wikipedia, the free encyclopedia
Jump to navigation Jump to search
For other uses, see Melpomene (disambiguation). 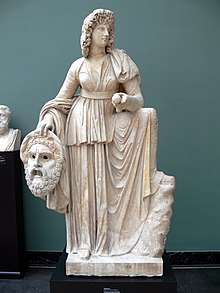 Roman statue of Melpomene, 2nd century AD. The muse is shown in a long-sleeved garment with a high belt, clothing that was associated with tragic actors. Her wreath of vines and grapes alludes to Dionysus, the god of the theatre.

Melpomene (/mɛlˈpɒmɪniː/; Ancient Greek: Μελπομένη, romanized: Melpoménē, lit. 'to sing' or 'the one that is melodious'), initially the Muse of Chorus, she then became the Muse of Tragedy, for which she is best known now.[1] Her name was derived from the Greek verb melpô or melpomai meaning "to celebrate with dance and song." She is often represented with a tragic mask and wearing the cothurnus, boots traditionally worn by tragic actors. Often, she also holds a knife or club in one hand and the tragic mask in the other.

In Greek and Latin poetry since Horace (d. 8 BC), it was commonly auspicious to invoke Melpomene.[2]