From Wikipedia, the free encyclopedia
(Redirected from Oceanid)
Jump to navigation Jump to search
Nymph daughters of Oceanus
This article is about Greek mythological sea nymphs. For the tone poem by Sibelius, see The Oceanides. 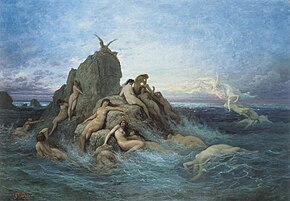 In Greek mythology, the Oceanids or Oceanides (/oʊˈsiːənɪdz, ˈoʊʃənɪdz/; Ancient Greek: Ὠκεανίδες, pl. of Ὠκεανίς) are the nymphs who were the three thousand (a number interpreted as meaning "innumerable") daughters of the Titans Oceanus and Tethys.[1]

The Oceanids' father Oceanus was the great primordial world-encircling river, their mother Tethys was a sea goddess, and their brothers the Potamoi (also three thousand in number) were the personifications of the great rivers of the world. Like the rest of their family, the Oceanid nymphs were associated with water, as the personification of springs.[2] Hesiod says they are "dispersed far and wide" and everywhere "serve the earth and the deep waters",[3] while in Apollonius of Rhodes' Argonautica, the Argonauts, stranded in the desert of Libya, beg the "nymphs, sacred of the race of Oceanus" to show them "some spring of water from the rock or some sacred flow gushing from the earth".[4]

The Oceanids are not easily categorized, nor confined to any single function,[5] not even necessarily associated with water.[6] Though most nymphs were considered to be minor deities, many Oceanids were significant figures. Metis, the personification of intelligence, was Zeus' first wife, whom Zeus impregnated with Athena and then swallowed.[7] The Oceanid Doris, like her mother Tethys, was an important sea-goddess.[8] While their brothers, the Potamoi, were the usual personifications of major rivers, Styx (according to Hesiod the eldest and most important Oceanid) was also the personification of a major river, the underworld's river Styx.[9] And some, like Europa, and Asia, seem associated with areas of land rather than water.[10]

The Oceanids were also responsible for keeping watch over the young.[11] According to Hesiod, who described them as "neat-ankled daughters of Ocean ... children who are glorious among goddesses", they are "a holy company of daughters who with the lord Apollo and the Rivers have youths in their keeping—to this charge Zeus appointed them"[12]

As a group, the Oceanids form the chorus of the tragedy Prometheus Bound, coming up from their cave beneath the ground, to console the chained Titan Prometheus.[22] They were also the companions of Persephone when she was abducted by Hades.[23]

Hesiod gives the names of 41 Oceanids, with other ancient sources providing many more. While some were important figures, most were not. Some were perhaps the names of actual springs, others merely poetic inventions.[24] Some names, consistent with the Oceanids' charge of having "youths in their keeping", represent things which parents might hope to be bestowed upon their children: Plouto ("Wealth"), Tyche ("Good Fortune"), Idyia ("Knowing"), and Metis ("Wisdom").[25] Others appear to be geographical eponyms, such as Europa, Asia, Ephyra (Corinth), and Rhodos (Rhodes).[26]

Several of the names of Oceanids were also among the names given to the Nereids. 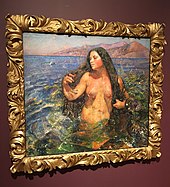 Sailors routinely honoured and entreated the Oceanids, dedicating prayers, libations and sacrifices to them. Appeals to them were made to protect seafarers from storms and other nautical hazards. Before they began their legendary voyage to Colchis in search of the Golden Fleece, the Argonauts made an offering of flour, honey and sea to the ocean deities, sacrificed bulls to them and entreated their protection from the dangers of their journey.[27]

The Manchester-born painter Annie Swynnerton, the first woman to be admitted to the Royal Academy in 1922, painted a work called Oceanid some time before 1908. It shows a strong, unidealised female figure at one with nature, typical of Swynnerton's many depictions of 'real' women and her feminist politics.