From Wikipedia, the free encyclopedia
(Redirected from Patriotic)
Jump to navigation Jump to search
Not to be confused with Nationalism. 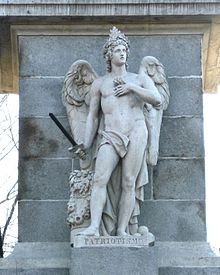 Allegory of Patriotism in the Monument to the Fallen for Spain in Madrid (1840), by sculptor Francisco Pérez del Valle

Patriotism or national pride is the feeling of love, devotion and sense of attachment to a homeland and alliance with other citizens who share the same sentiment. This attachment can be a combination of many different feelings relating to one's own homeland, including ethnic, cultural, political or historical aspects. It encompasses a set of concepts closely related to nationalism.[1][2][3]

Some manifestations of patriotism emphasise the "land" element in love for one's native land and use the symbolism of agriculture and the soil[4][5] – compare Blut und Boden.

An excess of patriotism in the defense of a nation is called chauvinism; another related term is jingoism. 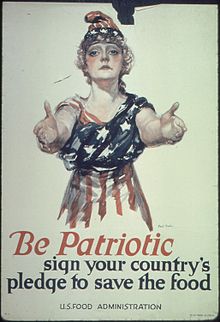 An American poster with a patriotic theme (1917), issued by the U.S. Food Administration during World War I

The general notion of civic virtue and group dedication has been attested in culture globally throughout the historical period. For the Enlightenment thinkers of 18th-century Europe, loyalty to the state was chiefly considered in contrast to loyalty to the Church. It was argued that clerics should not be allowed to teach in public schools since their patrie was heaven, so that they could not inspire love of the homeland in their students. One of the most influential proponents of this classical notion of patriotism was Jean-Jacques Rousseau.[1]

Enlightenment thinkers also criticized what they saw as the excess of patriotism. In 1774, Samuel Johnson published The Patriot, a critique of what he viewed as false patriotism. On the evening of 7 April 1775, he made the famous statement, "Patriotism is the last refuge of the scoundrel."[8] James Boswell, who reported this comment in his Life of Johnson, does not provide context for the quote, and it has therefore been argued that Johnson was in fact attacking the false use of the term "patriotism" by contemporaries such as John Stuart, 3rd Earl of Bute (the patriot-minister) and his supporters; Johnson spoke elsewhere in favor of what he considered "true" patriotism.[9] However, there is no direct evidence to contradict the widely held belief that Johnson's famous remark was a criticism of patriotism itself.

Patriotism may be strengthened by adherence to a national religion (a civil religion or even a theocracy). This is the opposite of the separation of church and state demanded by the Enlightenment thinkers who saw patriotism and faith as similar and opposed forces. Michael Billig and Jean Bethke Elshtain have both argued that the difference between patriotism and faith is difficult to discern and relies largely on the attitude of the one doing the labelling.[10]

Christopher Heath Wellman,[11] professor of philosophy at Washington University in St. Louis, describes that a popular view of the "patriotist" position is robust obligations to compatriots and only minimal samaritan responsibilities to foreigners.[12] Wellman calls this position "patriotist" rather than "nationalist" to single out the members of territorial, political units rather than cultural groups.[12]

George Orwell, in his influential essay Notes on Nationalism distinguished patriotism from the related concept of nationalism:

By 'patriotism' I mean devotion to a particular place and a particular way of life, which one believes to be the best in the world but has no wish to force upon other people. Patriotism is of its nature defensive, both militarily and culturally. Nationalism, on the other hand, is inseparable from the desire for power. The abiding purpose of every nationalist is to secure more power and more prestige, not for himself but for the nation or other unit in which he has chosen to sink his own individuality.[13]

Voltaire stated that "It is lamentable, that to be a good patriot one must become the enemy of the rest of mankind."[14] Arthur Schopenhauer wrote in his The World as Will and Representation that “The cheapest sort of pride is national pride; for if a man is proud of his own nation, it argues that he has no qualities of his own of which a person can be proud”[15]

The ribbon of Saint George is a patriotic symbol in Russia.

Marxists have taken various stances regarding patriotism. On one hand, Karl Marx famously stated that "The working men have no country"[16] and that "the supremacy of the proletariat will cause them [national differences] to vanish still faster." The same view is promoted by present-day Trotskyists such as Alan Woods, who is "in favour of tearing down all frontiers and creating a socialist world commonwealth."[17] On the other hand, Stalinists and Maoists are usually in favour of socialist patriotism based on the theory of socialism in one country.[18]

In the European Union, thinkers such as Jürgen Habermas have advocated a "Euro-patriotism", but patriotism in Europe is usually directed at the nation-state and more often than not coincides with "Euroscepticism".[citation needed]

Several surveys have tried to measure patriotism for various reasons, such as the Correlates of War project which found some correlation between war propensity and patriotism. The results from different studies are time dependent. For example, patriotism in Germany before World War I ranked at or near the top, whereas today it ranks at or near the bottom of patriotism surveys.[citation needed]

Since 1981, the World Values Survey explores people's national values and beliefs and refer to the average answer "for high income residents" of a country to the question "Are you proud to be [insert nationality]?". It ranges from 1 (not proud) to 4 (very proud).[19]