From Wikipedia, the free encyclopedia
(Redirected from Thalassa (mythology))
Jump to navigation Jump to search
For other uses, see Thalassa (disambiguation).

In Greek mythology, Thalassa (/θəˈlæsə/; Greek: Θάλασσα, "sea") was the primeval spirit of the sea.

Beekes suggested that the name is of Pre-Greek origin.[1]

Gaius Julius Hyginus described her in the preface to his Fabulae as daughter of Aether and Hemera (Fab. Praef., 2). With her male counterpart Pontus, she spawned the storm gods and the tribes of fish. The couple were later replaced by the other marine pairs, Oceanus and Tethys, Poseidon and Amphitrite.[2] Nevertheless, fables were devoted to her by Aesop and she was to be depicted in both artistic and literary works during the Common Era.

Some rare sources also attribute to her the sea-nymph Halia (Diodorus Siculus 5.55.4) and the goddess Aphrodite after the severed member of Ouranos was cast into the sea (Nonnus, Dionysiaca 12.43).[3] 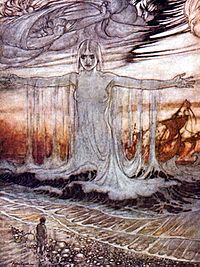 Thalassa defends herself in Aesop's fable, "The Farmer and the Sea"

Two rather similar fables are recorded by Babrius. In one, numbered 168 in the Perry Index, a farmer witnesses a shipwreck and reproaches the sea for being “an enemy of mankind”. Assuming the form of a woman, she answers by blaming the winds for her turbulence. Otherwise “I am gentler than that dry land of yours.”[4] In the other, a survivor from a shipwreck accuses the sea of treachery and receives the same excuse. But for the winds, “by nature I am as calm and safe as the land.”[5]

In yet another fable, Perry’s number 412 and only recorded by Syntipas, the rivers complain to the sea that their sweet water is turned undrinkably salty by contact with her. The sea replies that if they know as much, they should avoid such contact. The commentary suggests that the tale may be applied to people who criticize someone inappropriately even though they may actually be helping them.[6]

In the 2nd century AD, Lucian represented Thalassa in a comic dialogue with Xanthus, the god of the River Scamander, who had been attacked by a rival Greek deity for complaining that his course was being choked with dead bodies during the Trojan War. In this case he had been badly scorched and asks her to soothe his wounds.[7] 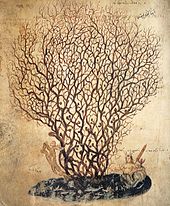 Illustration of coral with the goddess at the base, from a 6th-century medical discourse

While the sea-divinities Tethys and Oceanus were formerly represented in Roman-era mosaics, they were replaced at a later period by the figure of Thalassa, especially in Western Asia. There she was depicted as a woman clothed in bands of seaweed and half submerged in the sea, with the crab-claw horns that were formerly an attribute of Oceanus now transferred to her head. In one hand she holds a ship's oar, and in the other a dolphin.[8]