From Wikipedia, the free encyclopedia
(Redirected from 1 Samuel)
Jump to navigation Jump to search
Book of the Bible

The Book of Samuel forms part of the narrative history of Israel in the Nevi'im or "prophets" section of the Hebrew Bible/Old Testament called the Deuteronomistic history, a series of books (Joshua, Judges, Samuel, and Kings) that constitute a theological history of the Israelites and aim to explain God's law for Israel under the guidance of the prophets.[1] According to Jewish tradition, the book was written by Samuel, with additions by the prophets Gad and Nathan.[2] Modern scholarly thinking is that the entire Deuteronomistic history was composed in the period c. 630–540 BC by combining a number of independent texts of various ages.[3][4]

Samuel begins with the prophet Samuel's birth[5] and God's call to him as a boy. The story of the Ark of the Covenant that follows tells of Israel's oppression by the Philistines, which brought about Samuel's anointing of Saul as Israel's first king. But Saul proved unworthy and God's choice turned to David, who defeated Israel's enemies, purchased the threshing floor (2 Samuel 24:24), where his son, Solomon built the Temple and brought the Ark to Jerusalem. God then promised David and his successors an everlasting dynasty.[6] 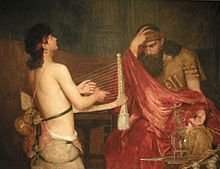 The childless Hannah vows to Yahweh of hosts that if she has a son, he will be dedicated to him. Eli, the priest of Shiloh (where the Ark of the Covenant is located), blesses her, and a child named Samuel is born. Samuel is dedicated to the Lord as a Nazirite – the only one besides Samson to be identified in the Bible. Eli's sons, Hophni and Phinehas, sin against God's laws and the people, which cause them to die in the battle of Aphek, but the child Samuel grows up "in the presence of the Lord."

In Samuel's old age, he appoints his sons Joel and Abijah as judges, but because of their corruption the people ask for a king to rule over them. God directs Samuel to grant them a king despite his concerns, and gives them Saul from the tribe of Benjamin. Shortly after Saul leads Israel to victory over Nahash of Ammon. Despite his numerous military victories, Saul disobeys Yahweh's instruction of destroying Amalek by sparing the Amalekite ruler and the best portion of their flocks to present them as sacrifices. Samuel rebukes Saul and tells him that God has chosen another man to be king of Israel.

God tells Samuel to anoint David of Bethlehem as king, and David enters Saul's court as his armor-bearer and harpist. Saul's son and heir Jonathan befriends David and recognizes him as the rightful king. Saul plots David's death, but David flees into the wilderness, where he becomes a champion of the Hebrews. David joins the Philistines but continues secretly to champion his own people, until Saul and Jonathan are killed in battle at Mount Gilboa. At this point, David offers a majestic eulogy, where he praises the bravery and magnificence of both his friend Jonathan and King Saul.[7]

The elders of Judah anoint David as king, but in the north Saul's son Ish-bosheth, or Ishbaal, rules over the northern tribes. After a long war, Ishbaal is murdered by Rechab and Baanah, two of his captains who hope for a reward from David; but David has them killed for killing God's anointed. David is then anointed King of all Israel. David captures Jerusalem and brings the Ark there. David wishes to build a temple, but Nathan tells him that one of his sons will be the one to build the temple. David defeats the enemies of Israel, slaughtering Philistines, Moabites, Edomites, Syrians and Arameans.

David commits adultery with Bathsheba, who becomes pregnant. When her husband, Uriah the Hittite returns from battle, David encourages him to go home and see his wife but Uriah declines in case David might need him. David thus deliberately sends Uriah on a suicide mission; and for this, Yahweh sends disasters against his house. Nathan tells David that the sword shall never depart from his house. For the remainder of his reign there are problems. Amnon (one of David's sons) rapes his half-sister Tamar (one of David's daughters). Absalom (another son of David) kills Amnon, rebels against his father, and David flees from Jerusalem. Absalom is killed following the Battle of the Wood of Ephraim, David is restored as king, and he returns to his palace. Finally only two contenders for the succession remain, Adonijah, son of David and Haggith, and Solomon, son of David and Bathsheba.

The Second Book of Samuel concludes with four chapters (chapters 21 to 24) which lie outside the chronological narrative of Saul and David. The narrative is resumed with the first Book of Kings, which relates how, as David lies dying, Bathsheba and Nathan ensure Solomon's elevation to the throne.

The four supplementary[8] chapters cover a great famine during David's reign,[9] the execution of seven of Saul's remaining descendants, only Mephibosheth being saved,[10] David's song of thanksgiving,[11] which is almost identical to Psalm 18, his last words,[12] a list of David's "mighty warriors",[13] an offering made by David using water from the well of Bethlehem,[14] David's sinful census,[15] a plague over Israel which David opted for as preferable to either famine or oppression,[16] and the construction of an altar on land he purchased from Araunah the Jebusite.[17] 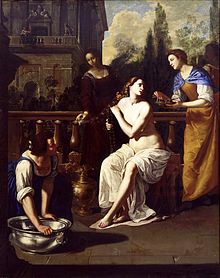 David and Bathsheba, by Artemisia Gentileschi. David is seen in the background, standing on a balcony.

What it is now commonly known as 1 Samuel and 2 Samuel are called by the Vulgate, in imitation of the Septuagint, 1 Kings and 2 Kings respectively.[18] Then, what it is now commonly known as 1 Kings and 2 Kings would be 3 Kings and 4 Kings in old Bibles before the year 1516.[19] It was in 1517 that use of the division we know now today used by Protestant Bibles and adopted by Catholics began. Some Bibles still preserve the old denomination, for example, the Douay-Rheims Bible.[20]

1 and 2 Samuel were originally (and, in most Jewish bibles, still are[21]) a single book, but the first Greek translation, called Septuagint and produced around the second century BC, divided it into two; this was adopted by the Latin translations used in the early Christian church of the West, and finally introduced into Jewish bibles around the early 16th century.[22] The Hebrew text, that is used by Jews today, called the Masoretic text, differs considerably from the Hebrew text that was the basis of the first Greek translation, and scholars are still working at finding the best solutions to the many problems this presents.[23]

Authorship and date of composition[edit]

According to passages 14b and 15a of the Bava Basra tractate of the Talmud, the book was written by Samuel up until 1 Samuel 25, which notes the death of Samuel, and the remainder by the prophets Gad and Nathan. Critical scholars from the 19th century onward have rejected this idea. Martin Noth in 1943 theorized that Samuel was composed by a single author as part of a history of Israel: the Deuteronomistic history (made up of Deuteronomy, Joshua, Judges, Samuel and Kings).[24] Although Noth's belief that the entire history was composed by a single individual has been largely abandoned, his theory in its broad outline has been adopted by most scholars.[25]

The Deuteronomistic view is that an early version of the history was composed in the time of king Hezekiah (8th century BC); the bulk of the first edition dates from his grandson Josiah at the end of the 7th BC, with further sections added during the Babylonian exile (6th century BC) and the work was substantially complete by about 550 BC. Further editing was apparently done even after then. For example, A. Graeme Auld, Professor of Hebrew Bible at the University of Edinburgh, contends that the silver quarter-shekel which Saul's servant offers to Samuel in 1 Samuel 9 "almost certainly fixes the date of this story in the Persian or Hellenistic period" because a quarter-shekel was known to exist in Hasmonean times.[26]

This view of late compilation for Samuel has faced serious scholarly opposition on the basis that evidence for the Deuteronimistic history is scant, and that Deuteronimistic advocates are not in consensus as to the origin and extent of the History. Secondly, the basic theological concerns identified with the Deuteronimistic school are tenets central to Hebrew theology in texts that are widely regarded as predating Josiah. Thirdly, there are notable differences in style and thematic emphasis between Deuteronomy and Samuel. Finally, there are widely acknowledged structural parallels between the Hittite suzerain treaty of the second millennium BC and the Book of Deuteronomy itself, far before the time of Josiah. The alternative view is that it is difficult to determine when the events of Samuel were recorded: "There are no particularly persuasive reasons to date the sources used by the compiler later than the early tenth century events themselves, and good reason to believe that contemporary records were kept (cf. 2 Sam. 20:24–25)."[29]

The sources used to construct 1 and 2 Samuel are believed to include the following:[30] 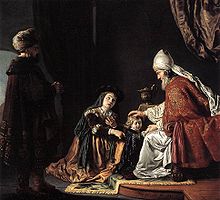 The Book of Samuel is a theological evaluation of kingship in general and of dynastic kingship and David in particular.[35] The main themes of the book are introduced in the opening poem (the "Song of Hannah"): (1) the sovereignty of Yahweh, God of Israel; (2) the reversal of human fortunes; and (3) kingship.[36] These themes are played out in the stories of the three main characters, Samuel, Saul and David.

Samuel answers the description of the "prophet like Moses" predicted in Deuteronomy 18:15–22: like Moses, he has direct contact with Yahweh, acts as a judge, and is a perfect leader who never makes mistakes.[37] Samuel's successful defense of the Israelites against their enemies demonstrates that they have no need for a king (who will, moreover, introduce inequality), yet despite this the people demand a king. But the king they are given is Yahweh's gift, and Samuel explains that kingship can be a blessing rather than a curse if they remain faithful to their God. On the other hand, total destruction of both king and people will result if they turn to wickedness.[24]

Saul is the chosen one, tall, handsome and "goodly",[38] a king appointed by Yahweh, and anointed by Samuel, Yahweh's prophet, and yet he is ultimately rejected.[39] Saul has two faults which make him unfit for the office of king: carrying out a sacrifice in place of Samuel (1 Samuel 13:8–14), and failing to exterminate the Amalekites, in accordance to God's commands, and trying to compensate by claiming that he reserved the surviving Amalekite livestock for sacrifice (1 Samuel 15).[40]

One of the main units within Samuel is the "History of David's Rise", the purpose of which is to justify David as the legitimate successor to Saul.[41] The narrative stresses that he gained the throne lawfully, always respecting "the Lord's anointed" (i.e. Saul) and never taking any of his numerous chances to seize the throne by violence.[42] As God's chosen king over Israel, David is also the son of God ("I will be a father to him, and he shall be a son to me..." – 2 Samuel 7:14).[43] God enters into an eternal covenant (treaty) with David and his line, promising divine protection of the dynasty and of Jerusalem through all time.[44]

2 Samuel 23 contains a prophetic statement described as the "last words of David" (verses 1–7) and details of the 37 "mighty men" who were David's chief warriors (verses 8–39). The Jerusalem Bible states that last words were attributed to David in the style of Jacob (see Jacob's Blessing, Genesis 49) and Moses (see Blessing of Moses, Deuteronomy 33). Its editors note that "the text has suffered considerably and reconstructions are conjectural".[45]

1 Kings 2:1–9 contains David's final words to Solomon, his son and successor as king.