From Wikipedia, the free encyclopedia
Jump to navigation Jump to search
For other uses, see Ambrosia (disambiguation). 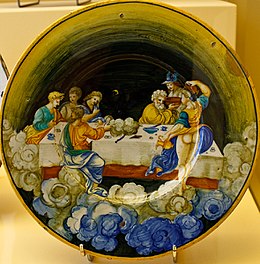 The Food of the Gods on Olympus (1530), majolica dish attributed to Nicola da Urbino

In the ancient Greek myths, ambrosia (/æmˈbroʊʒə/, Ancient Greek: ἀμβροσία, "immortality") is the food or drink of the Greek gods,[1] often depicted as conferring longevity or immortality upon whoever consumed it.[2] It was brought to the gods in Olympus by doves and served by either Hebe or Ganymede at the heavenly feast.[3][4]

Ambrosia is sometimes depicted in ancient art as distributed by a nymph labeled with that name and a nurse of Dionysus.[5] In the myth of Lycurgus, the king attacked Ambrosia and Dionysus' entourage, causing the god to drive Lycurgus insane.

For its Indian equivalent, see Amrita.

Ambrosia is very closely related to the gods' other form of sustenance, nectar. The two terms may not have originally been distinguished;[6] though in Homer's poems nectar is usually the drink and ambrosia the food of the gods; it was with ambrosia Hera "cleansed all defilement from her lovely flesh",[7] and with ambrosia Athena prepared Penelope in her sleep,[8] so that when she appeared for the final time before her suitors, the effects of years had been stripped away, and they were inflamed with passion at the sight of her. On the other hand, in Alcman,[9] nectar is the food, and in Sappho[10] and Anaxandrides, ambrosia is the drink.[11] A character in Aristophanes' Knights says, "I dreamed the goddess poured ambrosia over your head—out of a ladle." Both descriptions could be correct, as ambrosia could be a liquid considered a food (such as honey).

The consumption of ambrosia was typically reserved for divine beings. Upon his assumption into immortality on Olympus, Heracles is given ambrosia by Athena, while the hero Tydeus is denied the same thing when the goddess discovers him eating human brains. In one version of the myth of Tantalus, part of Tantalus' crime is that after tasting ambrosia himself, he attempts to steal some away to give to other mortals.[12] Those who consume ambrosia typically had not blood in their veins, but ichor, the blood of immortals.[13]

Both nectar and ambrosia are fragrant, and may be used as perfume: in the Odyssey Menelaus and his men are disguised as seals in untanned seal skins, "...and the deadly smell of the seal skins vexed us sore; but the goddess saved us; she brought ambrosia and put it under our nostrils."[14] Homer speaks of ambrosial raiment, ambrosial locks of hair, even the gods' ambrosial sandals.

Among later writers, ambrosia has been so often used with generic meanings of "delightful liquid" that such late writers as Athenaeus, Paulus and Dioscurides employ it as a technical terms in contexts of cookery,[15] medicine,[16] and botany.[17] Pliny used the term in connection with different plants, as did early herbalists.[18]

Additionally, some modern ethnomycologists, such as Danny Staples, identify ambrosia with the hallucinogenic mushroom Amanita muscaria: "...it was the food of the gods, their ambrosia, and nectar was the pressed sap of its juices", Staples asserts.[19]

W. H. Roscher thinks that both nectar and ambrosia were kinds of honey, in which case their power of conferring immortality would be due to the supposed healing and cleansing powers of honey,[1] which is in fact anti-septic, and because fermented honey (mead) preceded wine as an entheogen in the Aegean world; on some Minoan seals, goddesses were represented with bee faces (compare Merope and Melissa).

The concept of an immortality drink is attested in at least two Indo-European areas: Greek and Sanskrit. The Greek ἀμβροσία (ambrosia) is semantically linked to the Sanskrit अमृत (amṛta) as both words denote a drink or food that gods use to achieve immortality. The two words appear to be derived from the same Indo-European form *ṇ-mṛ-tós, "un-dying"[20] (n-: negative prefix from which the prefix a- in both Greek and Sanskrit are derived; mṛ: zero grade of *mer-, "to die"; and -to-: adjectival suffix). A semantically similar etymology exists for nectar, the beverage of the gods (Greek: νέκταρ néktar) presumed to be a compound of the PIE roots *nek-, "death", and -*tar, "overcoming". 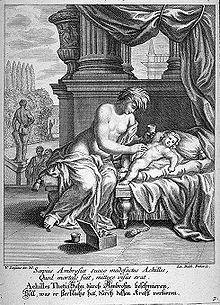 Lycurgus of Thrace and Ambrosia[edit] 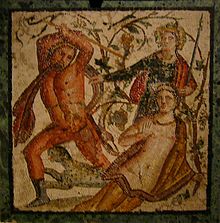 Lycurgus, king of Thrace, forbade the cult of Dionysus, whom he drove from Thrace, and attacked the gods' entourage when they celebrated the god. Among them was Ambrosia, who turned herself into a grapevine to hide from his wrath. Dionysus, enraged by the king's actions, drove him mad. In his fit of insanity he killed his son, whom he mistook for a stock of ivy, and then himself.