From Wikipedia, the free encyclopedia
Jump to navigation Jump to search
For other uses, see Clio (disambiguation).
Muse of history in Ancient Greek mythology 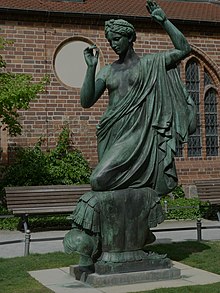 Statue of Clio by Albert Wolff in Berlin

In Greek mythology, Clio (traditionally /ˈklaɪoʊ/, but now more frequently /ˈkliːoʊ/; Greek: Κλειώ, Kleiṓ; "made famous" or "to make famous"), also spelled Kleio,[1] is the muse of history,[2] or in a few mythological accounts, the muse of lyre playing.[3]

Clio, sometimes referred to as "the Proclaimer", is often represented with an open parchment scroll, a book, or a set of tablets. The name is etymologically derived from the Greek root κλέω/κλείω (meaning "to recount," "to make famous,"[4] or "to celebrate").[5]

Like all the muses, she is a daughter of Zeus and the Titaness Mnemosyne, goddess of memory. Along with her sister Muses, she is considered to dwell at either Mount Helicon or Mount Parnassos.[2] Other common locations for the Muses are Pieria in Thessaly, near to Mount Olympus.[3] She had one son, Hyacinth, with one of several kings, in various myths—with Pierus or with king Oebalus of Sparta, or with king Amyclas,[6] progenitor of the people of Amyclae, dwellers about Sparta. Some sources say she is also the mother of Hymenaios.[citation needed] Other accounts credit her as the mother of Linus, a poet who was buried at Argos, although Linus has a number of differing parents depending upon the account, including several accounts in which he is the son of Clio's sisters Urania or Calliope.[7]

In her capacity as "the proclaimer, glorifier and celebrator of history, great deeds and accomplishments,"[8] Clio is the namesake of various modern brands, including the Clio Awards for excellence in advertising. The Cambridge University History Society is informally referred to as Clio, similarly, the Cleo of Alpha Chi society at Trinity College, Connecticut is named after the muse. Likewise, the undergraduate student outreach group for the Penn Museum at the University of Pennsylvania is known as the Clio Society. 'Clio' also represents history in some coined words in academic usage: cliometrics, cliodynamics.

Clio Bay in Antarctica is named after the muse.