From Wikipedia, the free encyclopedia
Jump to navigation Jump to search
Legendary sword of King Arthur
For other uses, see Excalibur (disambiguation).

Excalibur (/ɛkˈskælɪbər/) is the legendary sword of King Arthur, sometimes also attributed with magical powers or associated with the rightful sovereignty of Britain. Excalibur and the Sword in the Stone (the proof of Arthur's lineage) are sometimes said to be the same weapon, but in most versions they are considered separate. Excalibur was associated with the Arthurian legend very early on. In Welsh, it is called Caledfwlch; in Cornish, Calesvol (in Modern Cornish: Kalesvolgh); in Breton, Kaledvoulc'h; and in Latin, Caliburnus.

The name Excalibur ultimately derives from the Welsh Caledfwlch (and Breton Kaledvoulc'h, Middle Cornish Calesvol), which is a compound of caled "hard" and bwlch "breach, cleft".[1] Caledfwlch appears in several early Welsh works, including the prose tale Culhwch and Olwen. The name was later used in Welsh adaptations of foreign material such as the Bruts (chronicles), which were based on Geoffrey of Monmouth. It is often considered to be related to the phonetically similar Caladbolg, a sword borne by several figures from Irish mythology, although a borrowing of Caledfwlch from Irish Caladbolg has been considered unlikely by Rachel Bromwich and D. Simon Evans. They suggest instead that both names "may have similarly arisen at a very early date as generic names for a sword". This sword then became exclusively the property of Arthur in the British tradition.[1][2]

Geoffrey of Monmouth, in his Historia Regum Britanniae (The History of the Kings of Britain, c. 1136), Latinised the name of Arthur's sword as Caliburnus (potentially influenced by the Medieval Latin spelling calibs of Classical Latin chalybs, from Greek chályps [χάλυψ] "steel"). Most Celticists consider Geoffrey's Caliburnus to be derivative of a lost Old Welsh text in which bwlch (Old Welsh bulc[h]) had not yet been lenited to fwlch (Middle Welsh vwlch or uwlch).[3][4][1] In the late 15th/early 16th-century Middle Cornish play Beunans Ke, Arthur's sword is called Calesvol, which is etymologically an exact Middle Cornish cognate of the Welsh Caledfwlch. It is unclear if the name was borrowed from the Welsh (if so, it must have been an early loan, for phonological reasons), or represents an early, pan-Brittonic traditional name for Arthur's sword.[5]

In Chrétien de Troyes' late 12th-century Old French Perceval, Arthur's knight Gawain carries the sword Escalibor and it is stated, "for at his belt hung Escalibor, the finest sword that there was, which sliced through iron as through wood"[9] ("Qu'il avoit cainte Escalibor, la meillor espee qui fust, qu'ele trenche fer come fust"[10]). This statement was probably picked up by the author of the Estoire Merlin, or Vulgate Merlin, where the author (who was fond of fanciful folk etymologies) asserts that Escalibor "is a Hebrew name which means in French 'cuts iron, steel, and wood'"[11] ("c'est non Ebrieu qui dist en franchois trenche fer & achier et fust"; note that the word for "steel" here, achier, also means "blade" or "sword" and comes from medieval Latin aciarium, a derivative of acies "sharp", so there is no direct connection with Latin chalybs in this etymology). It is from this fanciful etymological musing that Thomas Malory got the notion that Excalibur meant "cut steel"[12] ("'the name of it,' said the lady, 'is Excalibur, that is as moche to say, as Cut stele'").

Excalibur and the Sword in the Stone[edit] 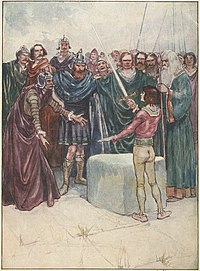 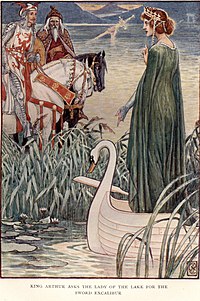 "King Arthur asks the Lady of the Lake for the sword Excalibur." Walter Crane's illustration for Henry Gilbert's King Arthur's Knights: The Tales Retold for Boys and Girls (1911)

In Arthurian romance, a number of explanations are given for Arthur's possession of Excalibur. In Robert de Boron's Merlin, the first tale to mention the "sword in the stone" motif c. 1200, Arthur obtained the British throne by pulling a sword from an anvil sitting atop a stone that appeared in a churchyard on Christmas Eve.[13] In this account, as foretold by Merlin, the act could not be performed except by "the true king," meaning the divinely appointed king or true heir of Uther Pendragon. As Malory related in his most famous English-language version of the Arthurian tales, the 15th-century Le Morte d'Arthur: "Whoso pulleth out this sword of this stone and anvil, is rightwise king born."[14][note 1]

The identity of this sword as Excalibur is made explicit in the Prose Merlin, part of the Lancelot-Grail cycle of French romances (the Vulgate Cycle).[15] In the Vulgate Mort Artu, when Arthur at the brink of death he orders Griflet to throw the sword into the enchanted lake; after two failed attempts (as he felt such a great sword should not be thrown away), Griflet finally complies with the wounded king's request and a hand emerges from the lake to catch it. This tale becomes attached to Bedivere instead of Griflet in Malory and the English tradition.[16]

However, in the Post-Vulgate Cycle and consequently Malory, early in his reign Arthur breaks the Sword from the Stone known as Caliburn while in combat against King Pellinore, and is given Excalibur by a Lady of the Lake in exchange for a later boon for her (some time later, she arrives at Arthur's court to demand the head of Sir Balin). Malory records both versions of the legend in his Le Morte d'Arthur, naming both swords as Excalibur.[17][18]

In Welsh legends, Arthur's sword is known as Caledfwlch. In Culhwch and Olwen, it is one of Arthur's most valuable possessions and is used by Arthur's warrior Llenlleawg the Irishman to kill the Irish king Diwrnach while stealing his magical cauldron. Irish mythology mentions a weapon Caladbolg, the sword of Fergus mac Róich, which was also known for its incredible power and was carried by some of Ireland's greatest heroes. The name, which can also mean "hard cleft" in Irish, appears in the plural, caladbuilc, as a generic term for "great swords" in Togail Troi ("The Destruction of Troy"), a 10th-century Irish translation of the classical tale.[19][20]

Though not named as Caledfwlch, Arthur's sword is described vividly in The Dream of Rhonabwy, one of the tales associated with the Mabinogion (as translated by Jeffrey Gantz): "Then they heard Cadwr Earl of Cornwall being summoned, and saw him rise with Arthur's sword in his hand, with a design of two chimeras on the golden hilt; when the sword was unsheathed what was seen from the mouths of the two chimeras was like two flames of fire, so dreadful that it was not easy for anyone to look."[21]

Geoffrey's Historia is the first non-Welsh source to speak of the sword. Geoffrey says the sword was forged in Avalon and Latinises the name "Caledfwlch" as Caliburnus. When his influential pseudo-history made it to Continental Europe, writers altered the name further until it finally took on the popular form Excalibur (various spellings in the medieval Arthurian romance and chronicle tradition include: Calabrun, Calabrum, Calibourne, Callibourc, Calliborc, Calibourch, Escaliborc, and Escalibor[22]). The legend was expanded upon in the Vulgate Cycle and in the Post-Vulgate Cycle which emerged in its wake. Both included the work known as the Prose Merlin, but the Post-Vulgate authors left out the Merlin continuation from the earlier cycle, choosing to add an original account of Arthur's early days including a new origin for Excalibur. 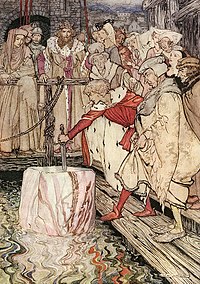 "How Galahad drew out the sword from the floating stone at Camelot." Arthur Rackham's illustration for Alfred W. Pollard's The Romance of King Arthur (1917) 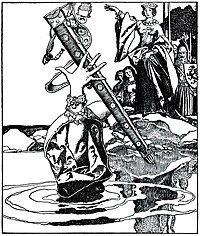 "Queen Morgana Loses Excalibur His Sheath." Howard Pyle's illustration for The Story of King Arthur and His Knights (1903)

In several early French works, such as Chrétien de Troyes' Perceval, the Story of the Grail and the Vulgate Lancelot Proper section, Excalibur is used by Gawain, Arthur's nephew and one of his best knights. This is in contrast to later versions, where Excalibur belongs solely to the king. The challenge of drawing a sword from a stone also appears in the later Arthurian stories of Galahad, whose achievement of the task indicates that he is destined to find the Holy Grail.

In many versions, Excalibur's blade was engraved with phrases on opposite sides: "Take me up" and "Cast me away" (or similar). In addition, when Excalibur was first drawn, in the first battle testing Arthur's sovereignty, its blade blinded his enemies. Malory[23] writes: "thenne he drewe his swerd Excalibur, but it was so breyght in his enemyes eyen that it gaf light lyke thirty torchys."[note 2]

In some tellings, Excalibur's scabbard was said to have powers of its own, as the one wearing it would not lose even a drop of blood. Any wounds received while wearing the scabbard would not bleed at all, thus preventing the death of the wearer. For this reason, Merlin chides Arthur for preferring the sword over the scabbard, saying that the latter was the greater treasure. In the later romance tradition, including Le Morte d'Arthur, the scabbard is stolen from Arthur by his half-sister Morgan le Fay in revenge for the death of her beloved Accolon and thrown into a lake, never to be found again. This act later enables the death of Arthur at the Battle of Camlann.

Other weapons have been associated with Arthur. Welsh tradition also knew of a dagger named Carnwennan and a spear named Rhongomyniad that belonged to him. Carnwennan ("little white-hilt") first appears in Culhwch and Olwen, where Arthur uses it to slice the witch Orddu in half.[1][24] Rhongomyniad ("spear" + "striker, slayer") is also mentioned in Culhwch, although only in passing; it appears as simply Ron ("spear") in Geoffrey's Historia. Geoffrey also names Arthur's shield as Pridwen, but in Culhwch, Prydwen ("fair face") is the name of Arthur's ship while his shield is named Wynebgwrthucher ("face of evening").[1][3]

The Alliterative Morte Arthure, a Middle English poem, mentions Clarent, a sword of peace meant for knighting and ceremonies as opposed to battle, which Mordred stole and then used to kill Arthur at Camlann.[25] The Prose Lancelot of the Vulgate Cycle mentions a sword called Seure, or Secace in some manuscripts, which belonged to the king but was used by Lancelot in one battle.[26]

In Welsh mythology, the Dyrnwyn ("White-Hilt"), one of the Thirteen Treasures of the Island of Britain, is said to be a powerful sword belonging to Rhydderch Hael,[27] one of the Three Generous Men of Britain mentioned in the Welsh Triads. When drawn by a worthy or well-born man, the entire blade would blaze with fire. Rhydderch was never reluctant to hand the weapon to anyone, hence his nickname Hael "the Generous", but the recipients, as soon as they had learned of its peculiar properties, always rejected the sword.

There are other similar weapons described in other mythologies. In particular, Claíomh Solais, which is an Irish term meaning "Sword of Light", or "Shining Sword", appears in a number of orally transmitted Irish folk-tales. The Sword in the Stone has an analogue in some versions of the story of Sigurd, whose father, Sigmund, draws the sword Gram out of the tree Barnstokkr where it is embedded by the Norse god Odin. A sword in the stone legend is also associated with the 12th-century Italian Saint Galgano.