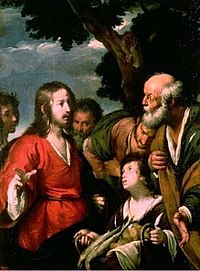 Feeding the multitude is a term used to refer to two separate miracles of Jesus reported in the Gospels.

The Feeding of the 5,000 is also known as the "miracle of the five loaves and two fishes"; the Gospel of John reports that Jesus used five loaves and two fishes supplied by a boy to feed a multitude. According to Matthew's gospel, when Jesus heard that John the Baptist had been killed, he withdrew by boat privately to a solitary place. Luke specifies that the place was near Bethsaida. The crowds followed Jesus on foot from the towns. When Jesus landed and saw a large crowd, he had compassion on them and healed their sick. As evening approached, the disciples came to him and said, "This is a remote place, and it's already getting late. Send the crowds away, so they can go to the villages and buy themselves some food."

Jesus said that they did not need to go away, and therefore the disciples were to give them something to eat. They said that they only had five loaves and two fishes, which Jesus asked to be brought to him. Jesus directed the people to sit down in groups on the grass. In Mark's Gospel, the crowds sat in groups of 50 and 100,[1] and in Luke's Gospel, Jesus' instructions were to seat the crowd in groups of 50,[2] implying that there were 100 such groups.

Taking the five loaves and the two fishes and looking up to Heaven, he gave thanks and broke them. Then he gave them to the disciples, and the disciples gave them to the people. They all ate and were satisfied, and the disciples picked up twelve baskets full of broken pieces that were leftover. The number of those who ate was about five thousand men, beside women and children. In John's Gospel, the multitude has been attracted around Jesus because of the healing works he has performed, and the feeding of the multitude is taken as a further sign (Greek: σημεῖον) that Jesus is the Messiah, the prophet who (according to the promise in the Book of Deuteronomy (Deuteronomy 18:15) ) is to come into the world" (John 6:14).[3]

The Church of the Multiplication in Tabgha is the site where many Christians believe the feeding of the five thousand to have taken place.

This story, which appears only in Mark and Matthew, is also known as the miracle of the seven loaves and fish, as the Gospel of Matthew refers to seven loaves and two fishes used by Jesus to feed a multitude.[4] According to the Gospels, a large crowd had gathered and was following Jesus. Jesus called his disciples to him and said:

"I have compassion for these people; they have already been with me three days and have nothing to eat. I do not want to send them away hungry, or they may collapse on the way."

"Where could we get enough bread in this remote place to feed such a crowd?"

"How many loaves do you have?" Jesus asked.

"Seven," they replied, "and two fishes."

Jesus told the crowd to sit down on the ground. Then he took the seven loaves and the fishes, and when he had given thanks, he broke them and gave them to the disciples, and they in turn to the people. They all ate and were satisfied. Afterwards, the disciples picked up seven basketfuls of broken pieces that were leftover. The number of those who ate was four thousand men, besides women and children. After Jesus had sent the crowd away, he got into the boat and went to the vicinity of Magadan (or Magdala).

Some commentators note the differences between some of the details of the accounts as a means of emphasizing that there were two distinct miracles: for example, the baskets used for collecting the food that remained were twelve 'κόφινοι' (hand baskets) in Mark 6:43 but seven 'σπυρίδες' (large baskets) in Mark 8:8. Cornelius a Lapide stated that a 'σπυρίς' or 'large basket' was double the size of a 'κόφινος'.[5] An indication of the size of a 'σπυρίς' is that the apostle Paul was let out of a building through a gap in the Damascus city wall inside one 'σπυρίς' , in order to avert a plot to kill him (Acts 9:25).[5]

In Matthew 16:7-11 and Mark 8:16-21 Jesus distinguishes the two miracles in a conversation with his apostles. A similar miracle is celebrated by St Paul the apostle in Acts 27:33-38.