From Wikipedia, the free encyclopedia
Jump to navigation Jump to search
For other uses, see Galahad (disambiguation).

Sir Galahad (/ˈɡæləhæd/; sometimes referred to as Galeas /ɡəˈliːəs/ or Galath /ˈɡæləθ/) among other versions of his name, is a knight of King Arthur's Round Table and one of the three achievers of the Holy Grail in Arthurian legend. He is the illegitimate son of Sir Lancelot and Elaine of Corbenic, and is renowned for his gallantry and purity as the most perfect of all knights. Emerging quite late in the medieval Arthurian tradition, Sir Galahad first appears in the Lancelot–Grail cycle, and his story is taken up in later works such as the Post-Vulgate Cycle and Sir Thomas Malory's Le Morte d'Arthur. His name should not be mistaken with Galehaut, a different knight from Arthurian legend.

The story of Galahad and his quest for the Holy Grail is a relatively late addition to the Arthurian legend. Galahad does not feature in any romance by Chrétien de Troyes, or in Robert de Boron's Grail stories, or in any of the continuations of Chrétien's story of the mysterious castle of the Fisher King. He first appears in a 13th-century Old French Arthurian epic, the interconnected set of romances known as the Vulgate Cycle. 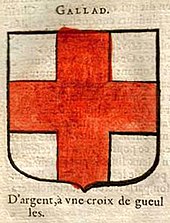 The original conception of Galahad, whose adult exploits are first recounted in the fourth book of the Vulgate Cycle, may derive from the Cistercian Order. According to some interpreters, the philosophical inspiration of the celibate, otherworldly character of the monastic knight Galahad came from this monastic order set up by St. Bernard of Clairvaux.[1] The Cistercian-Bernardine concept of Catholic warrior asceticism that so distinguishes the character of Galahad also informs St. Bernard's projection of ideal chivalry in his work on the Knights Templar, Liber ad milites templi de laude novae militiae. Significantly, in the narratives, Galahad is associated with a white shield with a vermilion cross, the very same emblem given to the Knights Templar by Pope Eugene III.

The life of Galahad portrayed in a stained glass window at St. Mary & St. George Anglican Church in Jasper, Alberta

The circumstances surrounding the conception of the boy Galahad derive from the Grail prose cycle. It takes place when King Arthur's greatest knight, Lancelot, mistakes Elaine of Corbenic for his secret mistress, Queen Guinevere. In the French tale used by Thomas Malory, King Pelles has already received magical foreknowledge that Lancelot will give his daughter a child and that this little boy will grow to become the greatest knight in the world, the knight chosen by God to discover the Holy Grail. Pelles also knows that Lancelot will only lie with his one true love, Guinevere. Destiny will have to be helped along a little; therefore, a conclusion which prompts Pelles to seek out "one of the greatest enchantresses of the time," Dame Brusen, who gives Pelles a magic ring that makes Elaine take on the appearance of Guinevere and enables her to spend a night with Lancelot. On discovering the deception, Lancelot draws his sword on Elaine, but when he finds out that they have conceived a son together, he is immediately forgiving; however, he does not marry Elaine or even wish to be with her any more and returns to Arthur's court. The young Galahad is born and placed in the care of a great aunt, who is an abbess at a nunnery, to be raised there.

According to the 13th-century Old French Prose Lancelot (part of the Vulgate Cycle), "Galahad" was Lancelot's original name, but it was changed when he was a child. At his birth, therefore, Galahad is given his father's own original name. Merlin prophesies that Galahad will surpass his father in valor and be successful in his search for the Holy Grail. Pelles, Galahad's maternal grandfather, is portrayed as a descendant of Joseph of Arimathea's brother-in-law Bron also known as Galahad (Galaad), whose line was entrusted with the Grail by Joseph.

Knighthood and the Grail Quest[edit] 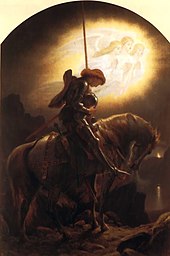 Upon reaching adulthood, Galahad is reunited with his father Lancelot, who knights his son after being defeated by him. Galahad is then brought to King Arthur's court at Camelot during Pentecost, where he is accompanied by a very old knight who immediately leads him over to the Round Table and unveils his seat at the Siege Perilous, an unused chair that has been kept vacant for the sole person who will succeed in the quest of the Holy Grail. For all others who have aspired to sit there, it has proved to be immediately fatal. Galahad survives this test, witnessed by Arthur who, upon realising the greatness of this new knight, leads him out to the river where a sword lies in a stone with an inscription reading "Never shall man take me hence but only he by whose side I ought to hang; and he shall be the best knight of the world." (The embedding of a sword in a stone is also an element of the legends of Arthur's original sword, the sword in the stone.) Galahad accomplishes this test with ease, and Arthur swiftly proclaims him to be the greatest knight ever. Galahad is promptly invited to become a Knight of the Round Table, and soon afterwards, Arthur's court witnesses an ethereal vision of the Grail. The quest to seek out this holy object is begun at once.

All of the Knights of the Round Table set out to find the Grail.[2] It is Galahad who takes the initiative to begin the search for the Grail; the rest of the knights follow him. Arthur is sorrowful that all the knights have embarked thus, for he discerns that many will never be seen again, dying in their quest. Arthur fears that it is the beginning of the end of the Round Table. This might be seen as a theological statement that concludes that earthly endeavours must take second place to the pursuit of the holy. Galahad, in some ways, mirrors Arthur, drawing a sword from a stone in the way that Arthur did. In this manner, Galahad is declared to be the chosen one.

Galahad at the Castle of Maidens, an 1890 painting by Edwin Austin Abbey

Galahad for the most part travels alone, smiting (and sparing) his enemies, rescuing Percival from twenty knights and saving maidens in distress, until he is finally reunited with Bors and Percival. These three knights then come across Percival's sister, who leads them to the mystical Ship of Solomon which they then use to cross the sea. 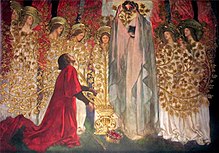 Galahad discovers the Grail, an 1895 painting by Edwin Austin Abbey

After many adventures, Galahad and Percival find themselves at the court of Pelles and Eliazar, his son. These men bring Galahad into a room where he is finally allowed to see the Holy Grail. Galahad is asked to take the vessel to the holy island Sarras. After seeing the Grail, Galahad, however, makes the request that he may die at the time of his choosing. So it is, while making his way back to Arthur's court, Galahad is visited by Joseph of Arimathea, and thus experiences such glorious rapture that he makes his request to die. Galahad bids Percival and Bors farewell, after which angels appear to take him to Heaven, an ascension witnessed by Bors and Percival. While it is not explicit that the Holy Grail is never to be seen again on earth, it is stated (in Malory's Le Morte d'Arthur) that there has since then been no knight capable of obtaining it.

Galahad's success in the high religious endeavour that was the search for the Holy Grail was predicted before his birth, not only by Pelles but also by Merlin, who once had told Uther Pendragon that there was one who would fill the place at the "table of Joseph", but that he was not yet born. At first this knight was believed to be Perceval; however it is later discovered to be Galahad. Galahad's conception is later glossed by Malory: "And so by enchantment [Elaine] won the love of Lancelot, and certainly she loved him again passing well." Galahad was conceived for the divine purpose of seeking the Holy Grail,[3] but this happened through pure deceit; under a cloak of deception that was very similar, in fact, to that which led to the conception of Arthur and of Merlin himself. Despite this, Galahad is the knight who is chosen to find the Holy Grail. Galahad, in both the Lancelot-Grail cycle and in Malory's retelling, is exalted above all the other knights: he is the one worthy enough to have the Holy Grail revealed to him and to be taken into heaven. 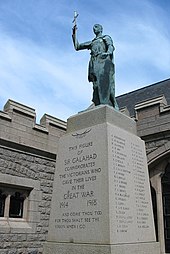 Statue of Galahad by Alfred Turner with quotation from Tennyson and list of fallen Old Victorians. World War I memorial at Victoria College, Jersey

In Thomas Malory's Le Morte d'Arthur, Galahad's incredible prowess and fortune in the quest for the Holy Grail are traced back to his piety. According to the legend, only pure knights may achieve the Grail. While in a specific sense, this "purity" refers to chastity, Galahad appears to have lived a generally sinless life and so as a result, he lives and thinks on a level entirely apart from the other knights around him. This quality is reflected in Alfred, Lord Tennyson's poem "Sir Galahad":

My good blade carves the casques of men, / My tough lance thrusteth sure, / My strength is as the strength of ten, / Because my heart is pure.[4]

Galahad is able to conquer all of his enemies because he is pure. In the next verse of this poem, Tennyson continues to glorify Galahad for remaining pure at heart, by putting these words into his mouth:

Galahad pursues a single-minded and lonely course, sacrificing much in his determination to aspire to a higher ideal:

Then move the trees, the copses nod, / Wings flutter, voices hover clear / "O just and faithful knight of God! / Ride on! the prize is near."[4]

Tennyson's poem follows Galahad's journey to find the Holy Grail but ends while he is still riding, still seeking, still dreaming; as if to say that the quest for the Holy Grail is an ongoing task. Unlike many other portrayals of the legend of Sir Galahad, Tennyson has Sir Galahad speak in the first person, gives the reader his thoughts and feelings as he rides on his quest, rather than just the details of his battles, as in Malory. 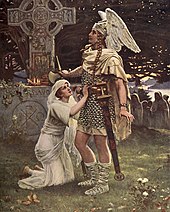 Sir Galahad's thoughts and aspirations have been explored as well by William Morris in his poem Sir Galahad, a Christmas Mystery,[5] published in 1858. In this poem, written more than twenty years after Tennyson's Sir Galahad, Galahad is "fighting an internal battle between the ideal and the human," believing that he is like God and that he is able to be a "saviour capable of imparting grace,"[6] following a dream in which he saves a dying knight with a kiss. Galahad isolates himself because he is a "self-centred figure".[6] Morris’ poem places this emotional conflict at centre stage, rather than concentrating upon Galahad's prowess for defeating external enemies, and the cold and the frost of a Christmas period serve to reinforce his "chilly isolation".[6] The poem opens on midwinter's night; Sir Galahad has been sitting for six hours in a chapel, staring at the floor. He muses to himself: 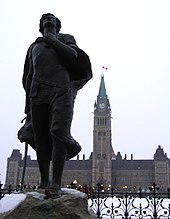 Statue of Sir Galahad on Parliament Hill in Ottawa: "Erected by the people to commemorate the act of heroism of Henry Albert Harper. In attempting to save the life of Miss Bessie Blair he was carried with her into the waters of the Ottawa River. It was December 6, 1901. He was 28 years old."