Goidelic languages historically formed a dialect continuum stretching from Ireland through the Isle of Man to Scotland. There are three modern Goidelic languages: Irish (Gaeilge), Scottish Gaelic (Gàidhlig), and Manx (Gaelg). Manx died out in the 20th century but has since been revived to some degree.[3]

Although Irish and Manx are often referred to as Irish Gaelic and Manx Gaelic (as they are Goidelic or Gaelic languages), the use of the word Gaelic is unnecessary because the terms Irish and Manx, to refer to language (as in, "to speak Irish"), always refer to these languages, but Scots has come to refer to a Germanic language and so "Scottish" can refer to things that are not Gaelic at all. Gaelic, by itself, is sometimes used to refer to Scottish Gaelic, especially in Scotland, and so it is ambiguous.

The endonyms (Gaeilge, Gaelic and Gaolainn in Irish, Gaelg in Manx and Gàidhlig in Scottish Gaelic) are derived from Old Irish Goídelc, which in turn is derived from Old Welsh Guoidel meaning "pirate, raider".[4][5] The medieval mythology of the Lebor Gabála Érenn places its origin in an eponymous ancestor of the Gaels and the inventor of the language, Goídel Glas.

The family tree of the Goidelic languages is as follows: 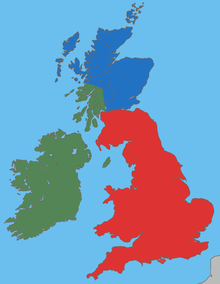 Goidelic was once restricted to Ireland and, possibly, the west coast of Scotland. Medieval Gaelic literature tells us that the kingdom of Dál Riata emerged in western Scotland during the 6th century. The mainstream view is that Dál Riata was founded by Irish migrants, but this is not universally accepted. Archaeologist Ewan Campbell says there is no archaeological evidence for a migration or invasion, and suggests strong sea links helped maintain a pre-existing Gaelic culture on both sides of the North Channel.[6]

Dál Riata grew in size and influence, and Gaelic language and culture was eventually adopted by the neighbouring Picts (a group of peoples who may have spoken a Brittonic language) who lived throughout Scotland.[7] Manx, the language of the Isle of Man, is closely akin to the Gaelic spoken in the Hebrides and the Irish spoken in northeast and eastern Ireland and the now-extinct Galwegian Gaelic of Galloway (in southwest Scotland), with some influence from Old Norse through the Viking invasions and from the previous British inhabitants.

The oldest written Goidelic language is Primitive Irish, which is attested in Ogham inscriptions from about the 4th century. The forms of this speech are very close, and often identical, to the forms of Gaulish recorded before and during the Roman Empire. The next stage, Old Irish, is found in glosses (i.e. annotations) to Latin manuscripts—mainly religious and grammatical—from the 6th to the 10th century, as well as in archaic texts copied or recorded in Middle Irish texts. Middle Irish, the immediate predecessor of the modern Goidelic languages, is the term for the language as recorded from the 10th to the 12th century: a great deal of literature survives in it, including the early Irish law texts.

Classical Gaelic, otherwise known as Early Modern Irish,[8] covers the period from the 13th to the 18th century, during which time it was used as a literary standard[9] in Ireland and Scotland.[10] This is often called Classical Irish, while Ethnologue gives the name "Hiberno-Scottish Gaelic" to this standardised written language. As long as this written language was the norm, Ireland was considered the Gaelic homeland to the Scottish literati.

Later orthographic divergence has resulted in standardised pluricentristic orthographies. Manx orthography, which was introduced in the 16th and 17th centuries, was based loosely on English and Welsh orthography, and so never formed part of this literary standard.

Irish is one of the Republic of Ireland's two official languages along with English. Historically the predominant language of the island, it is now mostly spoken in parts of the south, west, and northwest. The legally defined Irish-speaking areas are called the Gaeltacht; all government institutions of the Republic, in particular the parliament (Oireachtas), its upper house (Seanad) and lower house (Dáil), and the prime minister (Taoiseach) are officially named in this language, even in the context of English. At present, the Gaeltachtaí are primarily found in Counties Cork, Donegal, Mayo, Galway, Kerry, and, to a lesser extent, in Waterford and Meath. In the Republic of Ireland 1,774,437 (41.4% of the population aged three years and over) regard themselves as able to speak Irish.[11] Of these, 77,185 (1.8%) speak Irish on a daily basis outside school.[11] Irish is also undergoing a revival in Northern Ireland and has been accorded some legal status there under the 1998 Good Friday Agreement but its official usage remains divisive among a predominantly British population. The 2001 census in Northern Ireland showed that 167,487 (10.4%) people "had some knowledge of Irish". Combined, this means that around one in three people (c. 1.8 million) on the island of Ireland can understand Irish.

Despite the ascent in Ireland of the English and Anglicised ruling classes following the 1607 Flight of the Earls (and the disappearance of much of the Gaelic nobility), Irish was spoken by the majority of the population until the Great Famine of the 1840s. Disproportionately affecting the classes among whom Irish was the primary spoken language, famine and emigration precipitated a steep decline in native speakers which only recently has begun to reverse.[12]

The Irish language has been recognised as an official and working language of the European Union.[13] Ireland's national language was the twenty-third to be given such recognition by the EU and previously had the status of a treaty language.[14] 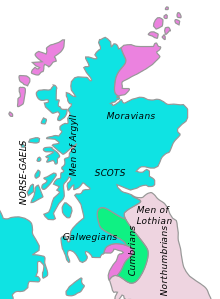 Linguistic division in early twelfth century Scotland:
Gaelic speaking
Norse-Gaelic zone, characterized by the use of both languages
English-speaking zone
Cumbric may have survived in this zone; more realistically a mixture of Cumbric, Gaelic (west) and English (east)
Main article: Scottish Gaelic

Its historical range was much larger. For example, it was the everyday language of most of the rest of the Scottish Highlands until little more than a century ago. Galloway was once also a Gaelic-speaking region, but the Galwegian dialect has been extinct there for approximately three centuries. It is believed to have been home to dialects that were transitional between Scottish Gaelic and the two other Goidelic languages. While Gaelic was spoken across the Scottish Borders and Lothian during the early High Middle Ages it does not seem to have been spoken by the majority and was likely the language of the ruling elite, land-owners and religious clerics. Some other parts of the Scottish Lowlands spoke Cumbric, and others Scots Inglis, the only exceptions being the Northern Isles of Orkney and Shetland where Norse was spoken.

Scotland takes its name from the Latin word for 'Gael', Scotus, plural Scoti (of uncertain etymology).[15] Scotland originally meant Land of the Gaels in a cultural and social sense. Until late in the 15th century, Scottis in Scottish English (or Scots Inglis) was used to refer only to Gaelic, and the speakers of this language who were identified as Scots. As the ruling elite became Scots Inglis/English-speaking, Scottis was gradually associated with the land rather than the people, and the word Erse ('Irish') was gradually used more and more as an act of culturo-political disassociation, with an overt implication that the language was not really Scottish, and therefore foreign. This was something of a propaganda label, as Gaelic has been in Scotland for at least as long as English, if not longer.

In the early 16th century the dialects of northern Middle English, also known as Early Scots, which had developed in Lothian and had come to be spoken elsewhere in the Kingdom of Scotland, themselves later appropriated the name Scots. By the 17th century Gaelic speakers were restricted largely to the Highlands and the Hebrides. Furthermore, the culturally repressive measures taken against the rebellious Highland communities by The Crown following the second Jacobite Rebellion of 1746 caused still further decline in the language's use — to a large extent by enforced emigration (e.g. the Highland Clearances). Even more decline followed in the 19th and early 20th centuries.

The Scottish Parliament has afforded the language a secure statutory status and "equal respect" (but not full equality in legal status under Scots law)[16] with English, sparking hopes that Scottish Gaelic can be saved from extinction and perhaps even revitalised.

Long the everyday language of most of the Isle of Man, Manx began to decline sharply in the 19th century. The last monolingual Manx speakers are believed to have died around the middle of the 19th century; in 1874 around 30% of the population were estimated to speak Manx, decreasing to 9.1% in 1901 and 1.1% in 1921.[17] The last native speaker of Manx, Ned Maddrell, died in 1974.

At the end of the 19th century a revival of Manx began, headed by the Manx Language Society (Yn Çheshaght Ghailckagh). Both linguists and language enthusiasts searched out the last native speakers during the 20th century, recording their speech and learning from them. In the United Kingdom Census 2011, there were 1823 Manx speakers on the island, representing 2.27% of the population of 80,398, and a steady increase in the number of speakers.[18]

Today Manx is used as the sole medium for teaching at five of the island's pre-schools by a company named Mooinjer veggey ("little people"), which also operates the sole Manx-medium primary school, the Bunscoill Ghaelgagh. Manx is taught as a second language at all of the island's primary and secondary schools and also at the University College Isle of Man and Centre for Manx Studies.

Influence on other languages[edit]

There are several languages that show Goidelic influence, although they are not Goidelic languages themselves: 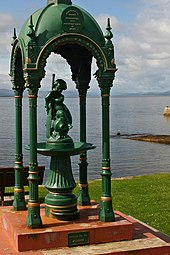 Water feature commemorating the first supply of water by gravitation to Portmahomack in 1887. It carries an inscription in poor Gaelic, "Uisce Tobar Na Baistiad" (which, if it read Uisge Tobar a' Bhaistidh would translate as "Water of the Well of Baptism")