From Wikipedia, the free encyclopedia
Jump to navigation Jump to search
For other uses, see Grinch (disambiguation).
Fictional character created by Dr. Seuss

The Grinch is a fictional character created by Dr. Seuss.[1] He is best known as the main character of the children's book How the Grinch Stole Christmas! (1957). He has been played/voiced by many different actors, including: Boris Karloff, Hans Conried, Bob Holt, Anthony Asbury, Jim Carrey, and Benedict Cumberbatch.

The Grinch is depicted as a hairy, pot-bellied, pear-shaped, snub-nosed creature with a cat-like face and cynical personality. In full-color adaptations, he is typically colored avocado green. He has spent the past 53 years living in seclusion on a cliff, overlooking the town of Whoville.

In contrast to the cheerful Whos, the Grinch is misanthropic and mean-tempered. The reason for this is a source of speculation; the consensus among the Whos is that he was born with a heart that is "two sizes too small". He especially hates the Christmas season, making particular note of how disturbing the various noises of Christmas time are to him, including the singing of Christmas carols. Unable to stand the holiday any longer, he decides to destroy it once and for all.

Aided by his pet dog, Max, he disguises himself as Santa Claus and breaks into the Whos' homes to steal everything they own and dump it off a nearby mountain. Although he pulls off the theft successfully, on Christmas morning, he is shocked to hear the Whos still singing cheerfully, happy simply to have each other. He then realizes that the holiday has a deeper meaning that he never considered. Inspired, he stops the Whos' belongings from falling off the edge of the mountain, and in the process (according to those who speculated upon the size of his heart before) his heart grows three sizes. He returns all the gifts he stole and gladly takes part in the Whos' Christmas celebration.

The Grinch is still portrayed as a bitter and ill-tempered character in artwork or other media. In both the animated TV special and the 2000 live-action film, he is shown to have superhuman strength when he stops an entire sleigh loaded with presents from going over a cliff and lifts it over his head, and he is also described as "[finding] the strength of ten Grinches plus two" (a phrase lifted from the original book) during that moment of crisis. In the 2018 film, the Grinch has assistance saving all the Whos' stolen goods.

With the character's anti-Christmas spirit followed by the transformation on Christmas morning, scholars have noted similarity to Ebenezer Scrooge from Charles Dickens' 1843 novella A Christmas Carol.[2][3] Cardiologist David Kass suggested that the rapid growth of the Grinch's heart at the end of the story indicates that the Grinch has the physiology of a Burmese python.[4]

In the 2000 adaptation, when he was a baby, his first sign of hating Christmas was at birth; abandoned in Whoville, he landed outside a "Christmas party" (in reality a key party—something that did not yet exist at the time Seuss wrote the book) and was left out in the cold when none of the revelers inside noticed him. When he was taken in he showed violence to the holiday, mostly biting off the head of a Santa plate and drawing violence to him when he was in school. He falls for a Who-girl named Martha, when a large boy bullies him for being different and telling him he already has a beard, which only fuels his determination to make the greatest gift using family heirlooms, a tiny gramophone and a colander and throwing them into a very hot cooking pot. When he returns to school for the gift exchange with a bag on his head, the Grinch is bullied again, this time by the boy about his gift and the bag on his head, to which the teacher tells Grinch to take it off, revealing his futile attempts to shave his face, which causes the whole class, especially the teacher to laugh. This causes the Grinch to lose his temper, resulting in him throwing his gift at a pile of presents, picking up the tree and throwing it, yelling of his hatred for Christmas. The film thus provides a backstory for the Grinch's resentment toward the holiday and the Whos, though Seuss himself simply explained it away as "no one quite knows the reason" in the book. The TV special The Grinch Grinches the Cat in the Hat posits that the death of the Grinch's mother may have also increased his grief and eliminated a positive influence on his life. 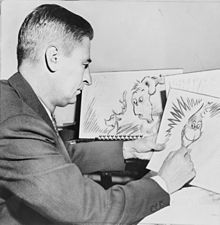 Dr. Seuss working on How the Grinch Stole Christmas! in early 1957

The first use of the word 'grinch' in a work by Dr. Seuss appears in the 1953 book Scrambled Eggs Super! about Peter T. Hooper, a boy who collects eggs from a number of exotic birds to make scrambled eggs. One of these exotic birds is the "Beagle-Beaked-Bald-Headed Grinch" who looks a real sourpuss.

The name later appeared in the May 1955 issue of Redbook in a 32-line poem called "The Hoobub and the Grinch." This version bears virtually no resemblance to the later character other than name, instead being a fast-talking salesman in the vein of Sylvester McMonkey McBean from The Sneetches and the Once-ler from Seuss's later book The Lorax.[5] "The Hoobub and the Grinch" would be republished as part of the posthumous anthology Horton and the Kwuggerbug and More Lost Stories in 2014, in which the illustration draws this Grinch far differently.[6]

The Grinch in his best known incarnation made his book debut in the 1957 story How the Grinch Stole Christmas, written and illustrated by Dr. Seuss, published as both a Random House book and in an issue of Redbook magazine. In 1966, the story was adapted into an animated television featurette of the same name, which was directed by Chuck Jones and included the song "You're a Mean One, Mr. Grinch". Boris Karloff serves as both the story's narrator and the voice of the Grinch, but the song was sung by Thurl Ravenscroft, as Karloff could not sing.[7]

In 1977, Seuss responded to the fan request for more Grinch tales by writing Halloween Is Grinch Night, that serves as a prequel to the 1966 film. This was followed in 1982, when Marvel green-lit The Grinch Grinches the Cat in the Hat, a TV film starring The Cat in the Hat, also produced by Dr. Seuss (though under his real name, Ted Geisel). Although not as successful as the original, the two films both received Emmy Awards. Several episodes of the 1996 Nick Jr. television show The Wubbulous World of Dr. Seuss featured the Grinch, this time in puppet form, a rare screen appearance for the character without being animated or illustrated.[8]

A 2000 live-action feature musical comedy film based on the story, directed by Ron Howard and starring Jim Carrey as the Grinch, was a major success of audience and box office.[9] Also, Carrey's performance as the Grinch was praised. A video game based on the film, simply entitled The Grinch, was released on several consoles and PC in the same year. It was followed in 2007 with the release of a Nintendo DS version that went under the full title of the movie.

The Grinch was portrayed on the stage when the story was turned into a musical by the Children's Theater Company out of Minneapolis. The show made it to Broadway by way of a limited run in 2006, with Julia Leuchtenberg playing the Grinch.[10] Icelandic actor Stefán Karl Stefánsson portrayed the Grinch in the touring production of the musical from 2008 to 2015. The Grinch is also a minor character in Seussical, which is a crossover between various Dr. Seuss stories.

The Grinch's story was adapted in animated form in 2018 by Illumination Entertainment, starring Benedict Cumberbatch as the title character.[11]

The Grinch has become an anti-icon of Christmas and the winter holidays, as a symbol of those who despise the holiday, much in the same nature as the earlier character of Ebenezer Scrooge. Over the years, the Grinch has appeared on various forms of memorabilia such as Christmas ornaments, plush dolls, and various clothing items.[10] The grumpy, anti-holiday spirit of the character has led to the everyday term "Grinch"[12][13] coming to refer to a person opposed to Christmas time celebrations[14][15] or to someone with a coarse, greedy attitude.[13] In 2002, TV Guide ranked The Grinch number 5 on its "50 Greatest Cartoon Characters of All Time" list.[12]

He also made a brief appearance on the television in Home Alone and Home Alone 2: Lost in New York.

In the early hours of Christmas Eve 2018 a group of climbers put a giant Santa hat on Antony Gormley's colossal Angel of the North statue (20m high, wingspan 54m) near Gateshead, north England; they had attempted to do this, unsuccessfully, for several Christmases.[16] In the early hours of 29 December the pranksters returned, one of them dressed as the Grinch and the others as Santa Claus, and the Grinch "stole" Santa's hat.[17]