The Lancelot–Grail, also known as the Vulgate Cycle or Pseudo-Map Cycle, is an early 13th-century literary cycle consisting of interconnected prose episodes of chivalric romance in Old French. A lengthy source of Arthurian legend, the cycle focuses on the love affair between Lancelot and Guinevere as well as the quest for the Holy Grail, expanding on the works of Robert de Boron and Chrétien de Troyes. After its completion around 1230–1235, the Lancelot–Grail was soon followed by its major rewrite known as the Post-Vulgate Cycle. 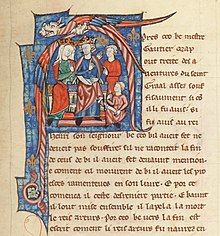 The Lancelot-Grail cycle emphasizes Christian themes in the King Arthur tradition, in particular through its expansion of the quest for the Holy Grail. Like Robert de Boron's original poem Merlin (c. 1195-1210), it claims that it is derived from a book titled the Livre dou Graal which was supposedly dictated by Merlin to his scribe Blaise [fr].

The cycle's actual authorship is unknown, but most scholars today believe it was written by multiple authors. There might have been either a single master-mind planner, the so-called "architect", who may have written the main section (Lancelot Proper), and then oversaw the work of multiple other anonymous scribes.[1][2] One theory identified the "architect" as French queen Eleanor of Aquitaine who would had set up the project already in 1194.[3][4] Alternately, each part may have been composed separately, arranged gradually, and rewritten for consistency and cohesiveness.

Welsh writer Gautier (Walter) Map (c. 1140-1209) is attributed to be the author, as can be seen in the notes and illustrations in some manuscripts describing his supposed discovery of an archive at Salisbury and his translation of these documents from Latin to Old French as ordered by Henry II of England.[5] This claim has been discounted, however, as Map died too early to be the author and the work is distinctly continental.[6][7][8] Today it is believed by some (such as editors of the Encyclopædia Britannica[9]) that a group of anonymous Catholic monks wrote the cycle or at least the Queste part, as evident by its very Cistercian spirit (with Augustinian intrusions[10]). Others doubt this, however, and a compromise theory postulates a more secular writer who had spent some time in a Cistercian monastery.[11]

The Lancelot-Grail can be divided into three[9] main units (some categorizations have either the Mort or both the Queste and the Mort regarded as separate sections independent of the Lancelot for the total of five branches[12]). The last one (or the last three in the other system) was actually the first to be written (beginning c. 1210[9]-1215).[13] The first two, serving as prequels, joined them later (before c. 1235).[14]

Lancelot Proper is regarded to be the first part ever written, c. 1215–1220,[24] perhaps originally as a non-cyclic, independent romance that was to begin with Lancelot's birth and finish with a happy end of him discovering his identity and receiving his first kiss of Guinevere when he confesses his love for her.[1][25] Elspeth Kennedy identified it in an early manuscript BNF fr. 768 which is about three times shorter than other editions and corresponds with the first part before the Charrette; the Grail Quest is actually mentioned in it as having been already completed by Percival.[24][26][27] 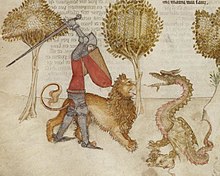 As the stories of the cycle were immensely popular in the medieval France and neighboring countries between the beginning of the 13th and the beginning of the 16th century, they survived in some two hundred complete manuscripts in various forms.[12][28] The Lancelot-Graal Project website lists (and links to the scans of many of them) close to 150 manuscripts in French,[29] some fragmentary, others, such as British Library Additional MS 10292–4, containing the entire cycle. Besides the British Library, scans of various manuscripts can be seen online through digital library websites of the Bibliothèque Nationale de France's Gallica[30] (including these from the Bibliothèque de l'Arsenal) and the University of Oxford's Digital Bodleian; many illustrations can be also found at the IRHT's Initiale project.[31] The earliest copies are of French origin and date from 1220–1230.

Numerous copies were produced in French throughout the remainder of the 13th, 14th and well into the 15th centuries in France, England and Italy, as well as translations into other European languages. Some of the manuscripts are richly illuminated: British Library Royal MS 14 E III, produced in Northern France in the early 14th century and once owned by King Charles V of France, contains over 100 miniatures with gilding throughout and decorated borders at the beginning of each section. Other manuscripts were made for less wealthy owners and contain very little or no decoration, for example British Library MS Royal 19 B VII, produced in England, also in the early 14th century, with initials in red and blue marking sections in the text and larger decorated initials at chapter-breaks.

However, very few copies of the entire Lancelot-Grail Cycle survive. Perhaps because it was so vast, copies were made of parts of the legend which may have suited the tastes of certain patrons, with popular combinations containing either only the tales of Merlin or Lancelot.[32][33] For instance, British Library Royal 14 E III contains the sections which deal with the Grail and religious themes, omitting the middle section, which relates Lancelot's chivalric exploits.

The Vulgate Cycle was soon afterwards subject to a major revision, done by probably the Cistercian scribes during the 1230s, in which much was left out and much added. In the resulting, far shorter Post-Vulgate Cycle, also known as the Roman du Graal, Lancelot no longer is the main character. The Post-Vulgate omits almost all of the Lancelot Proper section, and consequently most of Lancelot and Guinevere's content, instead focusing on the Grail Quest.[14] It also includes characters and scenes from the Prose Tristan (which itself had partially incorporated the Lancelot-Grail by copying parts of it[18][34]). This version of the Arthurian legend was one of the most important sources of Thomas Malory's for his seminal compilation Le Morte d'Arthur.[14]

H. Oskar Sommer published the entire original French text of the Vulgate Cycle in seven volumes in the years 1908–1916. The base text used was the British Library Additional mss. 10292–10294. It is however not a critical edition, but a composite text, where variant readings from alternate manuscripts are unreliably demarcated using square brackets.[35]

Sommer's has been the only complete cycle published,[36] but a new Pleiadés series edition is planned (as of 2013).[35]

Penguin Classics published a translation into English by Pauline Matarasso of the Queste in 1969,[37] followed in 1971 with a translation by James Cable of the Mort Artu.[38]

The first full English translations of the Vulgate and Post-Vulgate cycles were overseen by Norris J. Lacy. Volumes 1–4 contain the Vulgate Cycle proper.

A modern French translation of the Vulgate Cycle in three volumes.