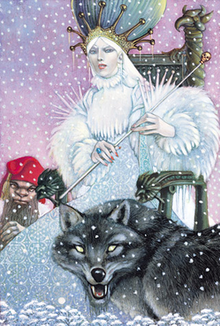 Jadis, the White Witch of Narnia. Art by Leo and Diane Dillon, 1994

Leo Dillon (March 2, 1933 – May 26, 2012) and Diane Dillon (née Sorber; born March 13, 1933) were American illustrators of children's books and adult paperback book and magazine covers. One obituary of Leo called the work of the husband-and-wife team "a seamless amalgam of both their hands".[3] In more than 50 years they created more than 100 speculative fiction book and magazine covers together as well as much interior artwork. Essentially all of their work in that field was joint.[1][2]

The Dillons won the Caldecott Medal in 1976 and 1977, the only consecutive awards of the honor.[4] In 1978 they were runners-up for the Hans Christian Andersen Award for children's illustrators; they were the U.S. nominee again in 1996.[5]

Leo Dillon, of Trinidadian immigrant parentage, was born and raised in East New York. He enlisted in the Navy for three years' service so that he could attend art school. He credited his interest in art and his inspiration to become an artist to his friend and mentor, Ralph Volman.[6] Diane Sorber hails from the Greater Los Angeles Area where her interest in art was encouraged early by her mother, who was a pianist.[6] The couple met at the Parsons School of Design in New York City in 1953 — where they "became instant archrivals and remained together from then on".[3] They graduated in 1956 and married the next year. This union resulted in an artistic collaboration, which the couple described as a third artist. Diane Dillon explained this in an interview through these words: “We could look at ourselves as one artist rather than two individuals, and that third artist was doing something neither one of us would do. We let it flow the way it flows when an artist is working by themselves and a color goes down that they didn’t quite expect and that affects the next colors they use, and it seems to have a life of its own.”[7]

An association with writer Harlan Ellison led to jobs doing book covers for his short story collections and both cover and interior woodcut illustration for his anthology Dangerous Visions. They illustrated a large number of mass market paperback book covers for the original Ace Science Fiction Specials, for which they won their first major award, science fiction's 1971 Hugo Award for Best Professional Artist. A detailed biography and introduction to their work and styles were written by Byron Preiss in a book he edited in 1981, entitled The Art of Leo & Diane Dillon. They once described their work as incorporating motifs derived from their respective heritages.[clarification needed] This can be demonstrated in their work for Margaret Musgrove's Ashanti to Zulu, which used tribal motifs and combined historical with contemporary styles.[8]

On May 28, 2012, Ellison reported on his website his reception of a phone call from Diane announcing Leo's death at the age of 79 from lung cancer two days prior.[9] Spectrum Fantastic Art, an annual art competition and art book project of which the couple were general managers, confirmed Leo's death on its website.[10] The obituary of Leo in The New York Times praised the Dillons jointly as "one of the world's pre-eminent illustrators for young people, producing artwork — praised for its vibrancy, ecumenicalism and sheer sumptuous beauty — that was a seamless amalgam of both their hands", also noting the ethnoracial diversity of characters in the Dillons' work in the 1970s, "until then, the smiling faces portrayed in picture books had been overwhelmingly white."[3]

The Dillons had one surviving son. Lee (Lionel John Dillon III), born 1965, became an artist and collaborated with his parents several times, including the illustrations for Pish, Posh, Said Hieronymus Bosch by Nancy Willard (1991).[11] Both Leo and Diane lived in the Cobble Hill neighborhood at the time of Leo's death.