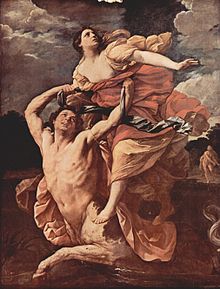 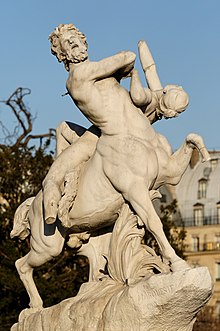 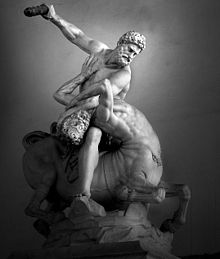 Heracles and Nessus by Giambologna, (1599), Florence.

In Greek mythology, Nessus (Ancient Greek: Νέσσος) was a famous centaur who was killed by Heracles, and whose tainted blood in turn killed Heracles. He was the son of Centauros. He fought in the battle with the Lapiths and became a ferryman on the river Euenos.

Nessus is known for his role in the story of the Tunic of Nessus. After carrying Deianeira, the wife of Heracles, across the river, he attempted to force himself upon her. Heracles saw this from across the river and shot a Hydra-poisoned arrow into Nessus's breast. As he lay dying, as a final act of malice, Nessus told Deianeira that his blood would ensure that Heracles would be true to her forever, knowing the blood to be infected with the hydra's poison.

Deianeira foolishly believed him. Later, when her trust began to wane because of Iole, she spread the centaur's blood on a robe and gave it to her husband. Heracles went to a gathering of heroes, where his passion got the better of him. Meanwhile, Deianeira accidentally spilled a portion of the centaur's blood onto the floor. To her horror, it began to fume by the light of the rising sun.

She instantly recognized it as poison and sent her messenger to warn Heracles but it was too late. Heracles lay dying slowly and painfully as the robe burned his skin—either in actual flames or by the heat of poison. He died a noble death on a funeral pyre of oak branches. Heracles was then taken to Mount Olympus by Zeus and welcomed among the gods for his heroic exploits.[1][2][3]

A similar theme appears in certain versions of the story of Medea.

Sophocles' play Trachiniae (Women of Trachis) is extensively based on a retelling of this myth.