Petrifaction in mythology and fiction

From Wikipedia, the free encyclopedia
Jump to navigation Jump to search
For other uses of petrifaction, see Petrified (disambiguation). 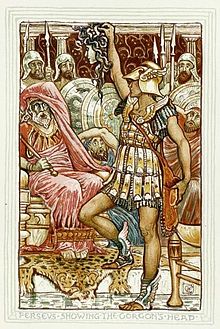 Perseus turning King Polydectes to stone with the head of Medusa.

Petrifaction, or petrification, defined as turning people to stone, is a common theme in folklore and mythology, as well as in some works of modern literature.

Petrification is associated with the legends of Medusa, the basilisk, the Svartálfar and the cockatrice, among others. In fairy tales, characters who fail in a quest may be turned to stone until they are rescued by the successful hero, as in the tales such as The Giant Who Had No Heart in His Body, The Water of Life and The Dancing Water, the Singing Apple, and the Speaking Bird, as well as many troll tales.

In Cornish folklore, petrifaction stories are used to explain the origin of prehistoric megalithic monuments such as stone circles and monoliths, including The Merry Maidens stone circle, The Nine Maidens of Boskednan, the Tregeseal Dancing Stones, and The Hurlers. The supposedly petrified Cardiff Giant was one of the most famous hoaxes in United States history.

Petrifaction is a key element of the biology of several major characters in the animated series Gargoyles; the titular gargoyles are all demonic-looking warriors at night, but when the sun rises, they turn to stone until sunset, with a key challenge of their existences being finding a place to 'sleep' during the day where they will not be shattered by any enemies.

Petrification through magic serves as a key weapon used by the antagonists in the novels The Lion, the Witch and the Wardrobe, Harry Potter and the Chamber of Secrets and The Patchwork Girl of Oz (Dr. Pipt's Liquid of Petrifaction). Witches in the television series The Vampire Diaries and its spin-off The Originals can use magic called desiccation to place vampires in a petrified state. Folkloric uses of petrification were introduced in the first edition of the Dungeons & Dragons tabletop role-playing game, which inspired later use in many video games such as King's Quest: Mask of Eternity, The Legend of Zelda: The Minish Cap, The Legend of Zelda: Phantom Hourglass.

It is also featured in the novel Percy Jackson & the Olympians; the films The Snow Queen's Revenge and Willow, the manga and anime series Naruto (Senjutsu), Negima!, Witch Craft Works, Campione!, My-Otome, and Dr. Stone; in the TV series Seijuu Sentai Gingaman, Masters of the Universe (Snake Men), My Little Pony: Friendship Is Magic, Princess Gwenevere and the Jewel Riders (episode "Lady of the Lake"/"Lady of the Lake") and Friday the 13th: The Series (episode "A Friend to the End"); the video games Elite Beat Agents, Drakan: Order of the Flame, Pokémon (the move "Glare"), and The Longest Journey (Roper Klacks), among many others.

Middle-earth trolls from J. R. R. Tolkien's universe can be turned to stone by direct sunlight, as depicted in folk tales. This vulnerability is also depicted in the Norwegian film Trollhunter, a fictional documentary that contains a "scientific" explanation for this.

The fictional form of petrification has got a qualitative (but not quantitative) relationship with real hypercalcemia, which is related to Vitamin D because of its significant role in calcium homeostasis and metabolism. Vitamin D is a group of fat-soluble secosteroids responsible for increasing intestinal absorption of calcium, magnesium, and phosphate, and multiple other biological effects.[27] The major natural source of the vitamin is synthesis of cholecalciferol in the skin from cholesterol through a chemical reaction that is dependent on sun exposure. Published cases of toxicity involving hypercalcemia in which the vitamin D dose and the 25-hydroxy-vitamin D levels are known all involve an intake of ≥40,000 IU (1,000 μg) per day.[28] However, this real effect cannot produce the fast and totally petrifying effects told by popular tales.