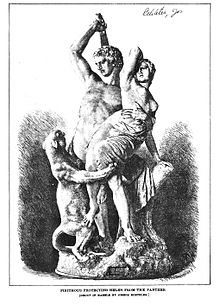 Pirithous (/ˌpaɪˈrɪθoʊ.əs/; Greek: Πειρίθοος or Πειρίθους, derived from περιθεῖν, peritheein, 'to run around'; also transliterated as Perithous), in Greek mythology, was the King of the Lapiths of Larissa in Thessaly, as well as best friend to Theseus.

Pirithous was a son of "heavenly" Dia, fathered either by Ixion[1][2][3] or by Zeus.[4][5] He married Hippodamia, daughter of Atrax or Butes, at whose wedding the famous Battle of Lapiths and Centaurs occurred. By his wife, he became the father of Polypoetes,[6] one of the Greek leaders during the Trojan War. Peirithous was also the close friend of the hero Theseus.

According to Homer, Dia had sex with Zeus, who was disguised as a stallion, and gave birth to Pirithous; a folk etymology derived Pirithous' name from peritheein (περιθεῖν, 'to run around'), because that was what Zeus did to seduce Dia.

His best friend was Theseus. In the Iliad I, Nestor numbers Pirithous and Theseus "of heroic fame" among an earlier generation of heroes of his youth, "the strongest men that Earth has bred, the strongest men against the strongest enemies, a savage mountain-dwelling tribe whom they utterly destroyed." No trace of such an oral tradition, which Homer's listeners would have recognized in Nestor's allusion, survived in literary epic.

In disjointed episodes that have survived, Pirithous had heard rumors about Theseus' courage and strength in battle but he wanted proof. He rustled Theseus' herd of cattle from Marathon, and Theseus set out to pursue him. Pirithous took up arms and the pair met, then became so impressed by each other they took an oath of friendship. They were among the company of heroes that hunted the Calydonian Boar, another mythic theme that was already well known to Homer's listeners.

Later, Pirithous was set to marry Hippodamia, their offspring being Polypoetes. The centaurs were guests at the party, but they got drunk and tried to abduct the women, including Hippodamia who was carried off by the intoxicated centaur Eurytion or Eurytus. The Lapiths won the ensuing battle, the Centauromachy, a favorite motif of Greek art.[7][8][9] 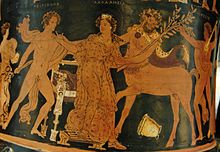 Pirithous, Hippodamia (here labeled under the name Laodameia), a Centaur, and Theseus, on an Apulian red-figure calyx-krater, 350-340 BC

Hippodamia died shortly after Polypoetes' birth, after which Pirithous went to visit Theseus at Athens only to discover that Theseus' own wife, Phaedra, was dead.[10] Thus, Pirithous and Theseus pledged to carry off daughters of Zeus; Theseus chose Helen of Sparta and together they kidnapped her when she was 13 years of age and decided to hold on to her until she was old enough to marry. Pirithous chose a more dangerous prize: Persephone herself. They left Helen with Theseus' mother, Aethra, at Aphidnae, and traveled to the underworld. When they stopped to rest, they found themselves unable to stand up from the rock as they saw the Furies appear before them. Other accounts say that Pirithous was overcome by a horde of Furies, and dragged off to eternal punishment.[citation needed]

Heracles freed Theseus from the stone, but the earth shook when he attempted to free Pirithous.[11] He had committed too great a crime for wanting the wife of one of the great gods as his own bride.[12] By the time Theseus returned to Athens, the Dioscuri (Helen's twin brothers Castor and Pollux) had taken Helen back to Sparta; they had taken captive Aethra as well as Pirithous' sister, Physadeia, and they became handmaidens of Helen and later followed her to Troy.[13]

The rescue of Theseus and Pirithous acquired a humorous tone in the realm of Attic comedy, in which Heracles attempted to free them from the rock to which they had been bound together in the Underworld (for having tried to carry off Persephone). He succeeded in freeing only Theseus and left behind his buttocks attached to the rocks. Due to this Theseus came to be called hypolispos, meaning "with hinder parts rubbed smooth."[14][15] This may have been a later invention.