From Wikipedia, the free encyclopedia
Jump to navigation Jump to search
This article is about the concept of current time. For a gift, see Gift. For other uses, see Present (disambiguation) and Presence (disambiguation).

The present is a moment in time discernible as intermediate between past and future.

The present (or here and now) is the time that is associated with the events perceived directly and in the first time,[1] not as a recollection (perceived more than once) or a speculation (predicted, hypothesis, uncertain). It is a period of time between the past and the future, and can vary in meaning from being an instant to a day or longer.

It is sometimes represented as a hyperplane in space-time,[2] typically called "now", although modern physics demonstrates that such a hyperplane cannot be defined uniquely for observers in relative motion. The present may also be viewed as a duration (see specious present).[3][4]

Contemporary history describes the historical timeframe that is immediately relevant to the present time and is a certain perspective of modern history.

"The present" raises the question: "How is it that all sentient beings experience now at the same time?"[7] There is no logical reason why this should be the case and no easy answer to the question.[citation needed]

Buddhism and many of its associated paradigms emphasize the importance of living in the present moment — being fully aware of what is happening, and not dwelling on the past or worrying about the future.[8] This does not mean that they encourage hedonism, but merely that constant focus on one's current position in space and time (rather than future considerations, or past reminiscence) will aid one in relieving suffering. They teach that those who live in the present moment are the happiest.[9] A number of meditative techniques aim to help the practiser live in the present moment.

Christianity views God as being outside of time and, from the divine perspective past, present and future are actualized in the now of eternity. This trans-temporal conception of God has been proposed as a solution to the problem of divine foreknowledge (i.e. how can God know what we will do in the future without us being determined to do it) since at least Boethius.[10] Thomas Aquinas offers the metaphor of a watchman, representing God, standing on a height looking down on a valley to a road where past present and future, represented by the individuals and their actions strung out along its length, are all visible simultaneously to God.[11] Therefore, God's knowledge is not tied to any particular date.[12] 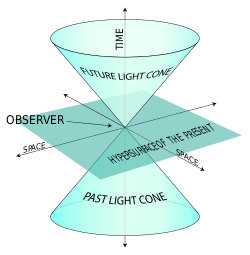 A visualisation of the present (dark blue plane) and past and future light cones in 2D space.

The original intent of the diagram on the right was to portray a 3-dimensional object having access to the past, present, and future in the present moment (4th dimension).[clarification needed]

It follows from Albert Einstein's Special Theory of Relativity that there is no such thing as absolute simultaneity. When care is taken to operationalise "the present", it follows that the events that can be labeled as "simultaneous" with a given event, can not be in direct cause-effect relationship. Such collections of events are perceived differently by different observers. Instead, when focusing on "now" as the events perceived directly, not as a recollection or a speculation, for a given observer "now" takes the form of the observer's past light cone. The light cone of a given event is objectively defined as the collection of events in causal relationship to that event, but each event has a different associated light cone. One has to conclude that in relativistic models of physics there is no place for "the present" as an absolute element of reality, and only refers to things that are close to us.[13] Einstein phrased this as: "People like us, who believe in physics, know that the distinction between past, present, and future is only a stubbornly persistent illusion".[14][15]

In physical cosmology, the present time in the chronology of the universe is estimated at 13.8 billion years after the singularity determining the arrow of time. In terms of the metric expansion of space, it is in the dark-energy-dominated era, after the universe's matter content has become diluted enough for metric expansion to be dominated by vacuum energy (dark energy). It is also in the universe's Stelliferous Era, after enough time for superclusters to have formed (at about 5 billion years), but before the accelerating expansion of the universe has removed the local supercluster beyond the cosmological horizon (at about 150 billion years).[16]

In radiocarbon dating, the "present" is defined as AD 1950.

Quotations related to present at Wikiquote