A starship, starcraft, or interstellar spacecraft is a theoretical spacecraft designed for traveling between planetary systems.[1]

The term is mostly found in science fiction; as of 2020 no such craft has ever been constructed. Reference to a "star-ship" appears as early as 1882 in Oahspe: A New Bible.[2]

While NASA's Voyager and Pioneer probes have traveled into local interstellar space, the purpose of these uncrewed craft was specifically interplanetary, and they are not predicted to reach another star system (although Voyager 1 will travel to within 1.7 light years of Gliese 445 in approximately 40,000 years).[3] Several preliminary designs for starships have been undertaken through exploratory engineering, using feasibility studies with modern technology or technology thought likely to be available in the near future.

In April 2016, scientists announced Breakthrough Starshot, a Breakthrough Initiatives program, to develop a proof-of-concept fleet of small centimeter-sized light sail spacecraft named StarChip,[4] capable of making the journey to Alpha Centauri, the nearest extrasolar star system, at speeds of 20%[5][6] and 15%[7] of the speed of light, taking between 20 and 30 years to reach the star system, respectively, and about 4 years to notify Earth of a successful arrival.

In November 2018, SpaceX CEO Elon Musk announced that SpaceX was renaming the second stage and spaceship of the Big Falcon Rocket, a fully reusable launch vehicle and spacecraft system, to Starship.[8] Though the spacecraft does not possess any reasonable interstellar capability, Musk defended the name by claiming that "later versions will."[9] 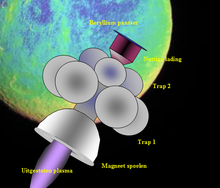 To travel between stars in a reasonable time using rocket-like technology requires very high effective exhaust velocity jet and enormous energy to power this, such as might be provided by fusion power or antimatter.

There are very few scientific studies that investigate the issues in building a starship. Some examples of this include:

The Bussard ramjet is an idea to use nuclear fusion of interstellar gas to provide propulsion.

Examined in an October 1973 issue of Analog, the Enzmann Starship proposed using a 12,000-ton ball of frozen deuterium to power pulse propulsion units. Twice as long as the Empire State Building and assembled in-orbit, the proposed spacecraft would be part of a larger project preceded by interstellar probes and telescopic observation of target star systems.

A common literary device is to posit a faster-than-light propulsion system (such as warp drive) or travel through hyperspace, although some starships may be outfitted for centuries-long journeys of slower-than-light travel. Other designs posit a way to boost the ship to near-lightspeed, allowing relatively "quick" travel (i.e. decades, not centuries) to nearer stars. This results in a general categorization of the kinds of starships:

Certain common elements are found in most fiction that discusses starships.

Fiction that discusses slower-than-light starships is relatively rare, since the time scales are so long. Instead of describing the interaction with the outside world, those fictions tend to focus on setting the whole story within the world of the (often very large) starship during its long travels. Sometimes the starship is a world, in perception or reality.

Travel at velocities greater than the speed of light is impossible according to the known laws of physics, although apparent faster-than-light (FTL) is not excluded by general relativity. The Alcubierre drive provides a theoretical way of achieving FTL, although it requires negative mass, which has not been discovered. Nevertheless, Harold G. White at NASA has designed the White–Juday warp-field interferometer to detect a microscopic instance of a warping of space-time according to the Alcubierre drive.

There are widely known vessels in various science fiction franchises. The most prominent cultural use and one of the earliest common uses of the term starship was in Star Trek: The Original Series.