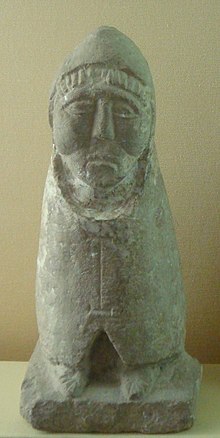 Gallo-Roman limestone statue of Telesphorus discovered in 1884 in Moulézan (southern France), now exhibited in the Archeological Museum of Nîmes. The god is dressed in the hooded cape typical of the depiction of Celts in Roman Gaul.

In ancient Greek religion, Telesphorus (Greek: Τελεσφόρος Telesphoros) was a son of Asclepius. He frequently accompanied his sister, Hygieia. He was a dwarf whose head was always covered with a cowl hood or cap.

He symbolized recovery from illness, as his name means "the accomplisher" or "bringer of completion" in Greek. Representations of him are found mainly in Anatolia and along the Danube.

Telesphorus is assumed to have been a Celtic god in origin, who was taken to Anatolia by the Galatians in the 3rd century BC, where he would have become associated with the Greek god of medicine, Asclepius, perhaps in Pergamon (an Asclepian cult center) and spread again to the West due to the rise of the Roman Empire, in particular during the 2nd century AD, from the reign of Hadrian.[1]