From Wikipedia, the free encyclopedia
Jump to navigation Jump to search
For other uses, see Terpsichore (disambiguation). 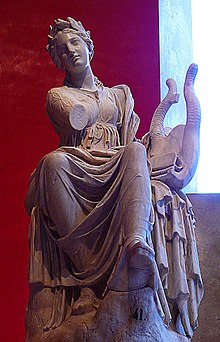 Greek statue of Terpsichore from Hadrian's Villa, presently at the Prado Museum (Madrid). 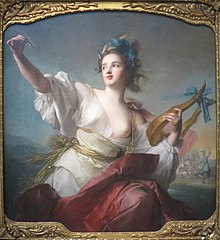 Terpsichore, Muse of Music and ballet, an oil on canvas painting by Jean-Marc Nattier (1739).

In Greek mythology, Terpsichore (/tərpˈsɪkəriː/; Τερψιχόρη, "delight in dancing") is one of the nine Muses and goddess of dance and chorus.[1] She lends her name to the word "terpsichorean" which means "of or relating to dance". She is usually depicted sitting down, holding a lyre, accompanying the dancers' choirs with her music. Her name comes from the Greek words τέρπω ("delight") and χoρός ("dance"). She was also said to be the mother of the Sirens and Parthenope by Achelous. In some accounts, she bore the Thracian king Biston by Ares.[2] 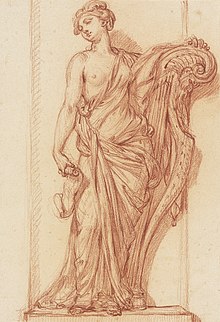 Augustin Pajou, The Muse Terpsichore, c. 1768, red chalk on laid paper, in the collection of the National Gallery of Art, Washington, DC.