The Tragical History of Romeus and Juliet

From Wikipedia, the free encyclopedia
Jump to navigation Jump to search
1562 narrative poem by Arthur Brooke 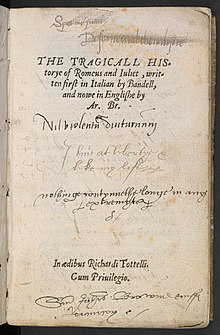 Frontispiece of The Tragicall Historye of Romeus and Juliet.

The Tragicall Historye of Romeus and Juliet is a narrative poem, first published in 1562 by Arthur Brooke, which was the key source for William Shakespeare’s Romeo and Juliet. Brooke is reported to have translated it from an Italian novella by Matteo Bandello; by another theory, it is mainly derived from a French adaptation of Bandello's novella which involves a man by the name of Reomeo Titensus and Juliet Bibleotet by Pierre Boaistuau, published by Richard Tottel. The play of Romeo and Juliet is of 4 days where as the one by Arthur Brooke takes place over many months, meaning that Shakespeare’s version is more intense than Arthur Brooke’s.

Little is known about Arthur Brooke. He was admitted as a member of Inner Temple on 18 December 1561 under the sponsorship of Thomas Sackville and Thomas Norton.[1] He drowned in 1563 by shipwreck while crossing to help Protestant forces in the French Wars of Religion.

The poem's ending differs significantly from Shakespeare's play—the nurse is banished and the apothecary is hanged for their involvement in the deception, while Friar Lawrence leaves Verona to end his days in a hermitage.